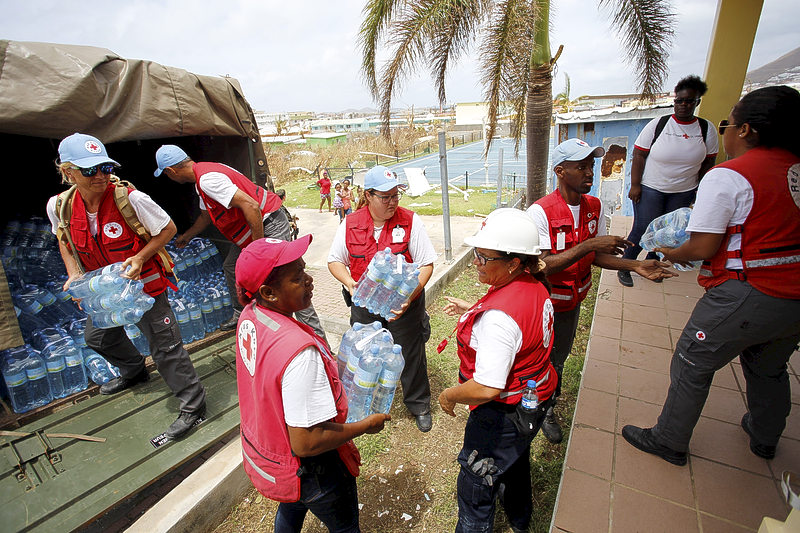 THE HAGUE–The Netherlands Red Cross, one of the major relief organisations active in St. Maarten since Hurricane Irma, keeps collecting funds in the Netherlands for St. Maarten. The 50 member Red Cross team on the island will keep providing what is termed as “mass care” in the coming weeks: the distribution of relief goods, giving assistance to people in need and finding missing persons.

The Hercules C-130 aircraft with relief goods for St. Maarten is on stand-by in Curaçao awaiting the reopening of the Princess Juliana International Airport to continue carrying out flights. The relief goods awaiting transport include packages with food, baby and personal hygiene supplies, as well as tarpaulins. An aircraft of Dutch Defence left the Netherlands for Curaçao last Sunday with 11 tonnes of relief supplies of the Red Cross.

In the past week-and-a-half, the Red Cross has been sending load after load of relief supplies to St. Maarten via Curaçao mostly consisting of water, food, medication, hygiene packages, tarpaulins, but also jerry cans and generators.

Following an assessment of the distribution points, the Red Cross will resume the handing out of relief goods to the people in the various districts. On Monday, Red Cross personnel handed out more than 1,000 tarpaulins in anticipation of Hurricane Maria.

Some 50 Red Cross volunteers from St. Maarten, Aruba, Curaçao and the Netherlands are on St. Maarten to provide what is termed as “mass care” which involves medical care, distribution of relief goods and helping to clean up damaged homes. Logistic experts are part of the team. Three experts have been busy localising missing persons working down the list of some 200 persons that have been reported missing.

Meanwhile the Red Cross in the Netherlands continues the national collection drive which up to last Friday had yielded more than 13.3 million euros. An actual amount of the collected funds was not available to the media on Wednesday. The Red Cross expects to give an update on the amount later this week.