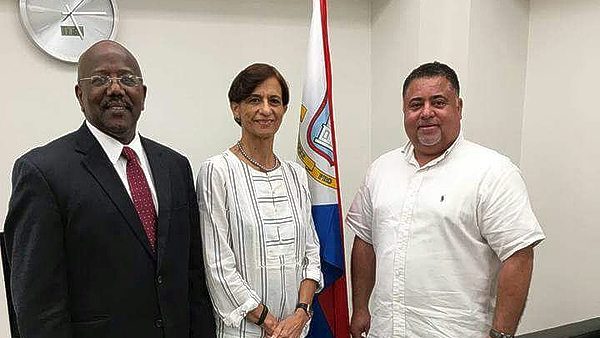 PHILIPSBURG–The red, white and blue coalition that was formed after the 2010 elections, but ended up short lived, will get another chance to firmly take the helm of the country with the signing of a new coalition agreement on Wednesday by the Democratic Party (DP), United St. Maarten Party (US Party) and National Alliance (NA). This new formation has tossed the United People’s (UP) party with its five seats into opposition.

The new agreement, signed by NA leader Prime Minister William Marlin, DP leader Member of Parliament Sarah Wescot-Williams, and US Party MP Frans Richardson, has as the reason for the new constellation is the coalition agreement of September 27 between NA/UP “did not result in the swearing in of a new Government” to date.

According to a press statement issued by the Governor’s Cabinet, Marlin, as formateur “having considered the issues in the formation” informed Governor Eugene Holiday, on Wednesday evening that “it was decided not to continue with the formation and that a coalition agreement was signed between NA, USP and DP.”

Holiday will make arrangements to meet with parties “as soon as possible to discuss the new developments.”

Prior to the declaration of the new coalition, the Governor had met in the past week with a number of persons about the process to form the UP/NA coalition. Based on the information received, he met with and received an update about the formation process, including results of the screening of the candidate ministers, from Marlin on Monday.

Wescot-Williams told The Daily Herald in an e-mail: “With the NA leader’s decision, given that no NA/UPP Government was/could be sworn in, and when asked, DP consented to join in coalition with the NA and USP to form the next Government for St. Maarten.”

The NA/UP agreement was signed shortly after the September 26 Parliamentary election results were announced and brought together NA and UP each with five seats in Parliament. Earlier this month, the now broken coalition submitted its 2016-2020 Governing Programme to Governor Eugene Holiday under the title “Stability.”

The swearing-in of a NA/UP supported Council of Ministers has not yet come to fruition due to matters arising from the screening of the Minister candidates, particularly those proposed by UP: MPs Theo Heyliger and Franklin Meyers and former MP Jules James.

The new coalition will also reflect the current caretaker cabinet called the Coalition of Eight, comprising NA, DP, US Party and then independent MPs Silvio Matser and Maurice Lake. Matser and Lake are both now with US Party. However, there will be some shifts in the division of ministerial portfolios.

The white party NA will retain the posts of Prime Minister, Minister of Finance, Minister of Education, Culture, Youth and Sports, and Minister Plenipotentiary. The party will gain the post of the Minister of Public Housing, Spatial Planning, Environment and Infrastructure VROMI.

The three parties have also agreed to negotiate a governing programme and appoint Ministers “committed to executing the said programme.”