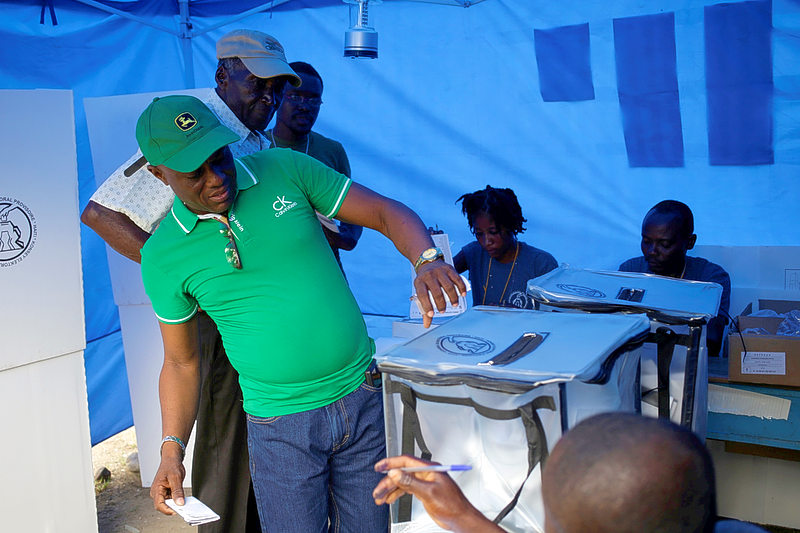 LES CAYES, Haiti– Haiti held a long-delayed election on Sunday amid scenes of devastation in parts of the country, with voters hoping a new president would boost the economy after a destructive hurricane and more than a year of political instability.

First held in October 2015, the election was annulled over allegations of fraud, and a rescheduled vote was postponed last month when Hurricane Matthew struck, killing up to 1,000 people and leaving 1.4 million needing humanitarian aid.

There were a number of reports of voting fraud too on Sunday in Haiti, the poorest country in the western hemisphere, and preliminary results are not expected before Monday.

Nonetheless, local election observers drew a broadly positive picture of the process, with initial findings suggesting it had passed off more smoothly than last year.

Homes, schools and farms across southwestern Haiti have all been scarred by Matthew, which piled fresh misery onto the nation of more than 10 million on the western half of the island of Hispaniola still recovering from a major earthquake in 2010.

“We are in a political crisis. We need an elected government to get out of this situation,” said 19-year-old Launes Delmazin as he voted for the first time in a school in Les Cayes, a southwestern port ravaged by Matthew last month.

Polling stations closed at 4:00pm local time (2100 GMT) and observers of the vote were expecting voter turnout to be low.

In Port-au-Prince and elsewhere, some people complained they were unable to vote because their names did not appear on lists at the polling stations, while others said that when they tried to vote they were told somebody had already done it for them.

Electoral council president Leopold Berlanger said he was satisfied with how the day had gone. He did, however, note there had been several arrests and an attempt made to burn a polling station in the southeastern district of Marigot.

More than two dozen candidates were competing to succeed Michel Martelly, who left the presidency in February. Since then, a caretaker government has run the country.

Local opinion polls are viewed with skepticism by civil society groups, though a recent survey by pollster BRIDES made local entrepreneur Jovenel Moise the favorite to take the presidency for Martelly’s Bald Heads Party in the first round.

Unless one candidate secures more than 50 percent of the vote or wins by at least 25 percentage points, a second round run-off is in prospect for the top two finishers on Jan. 29. The victor is scheduled to take office in February.