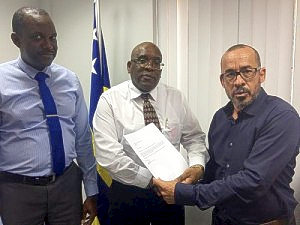 KFO presents its petition to Parliament.

WILLEMSTAD–“Kòrsou Fuerte i Outónomo” (KFO) wants a new referendum in Curaçao on May 31, 2018. A proposal for this was submitted to President of Parliament William Millerson exactly a year earlier.

KFO (Curaçao Strong and Autonomous) believes that the people of the island need to decide whether they want to be left with the Kingdom Consensus Laws introduced on October 10, 2010, after Curaçao became a country within the Dutch Kingdom. These laws arrange supervision from The Hague in areas such as Justice and Finance.

The action group headed by lawyer Peppie Sulvaran wants independence, but that is not the question for the desired referendum. KFO has already collected 8,000 signatures to back its petition and believes they can reach 10,000 soon.