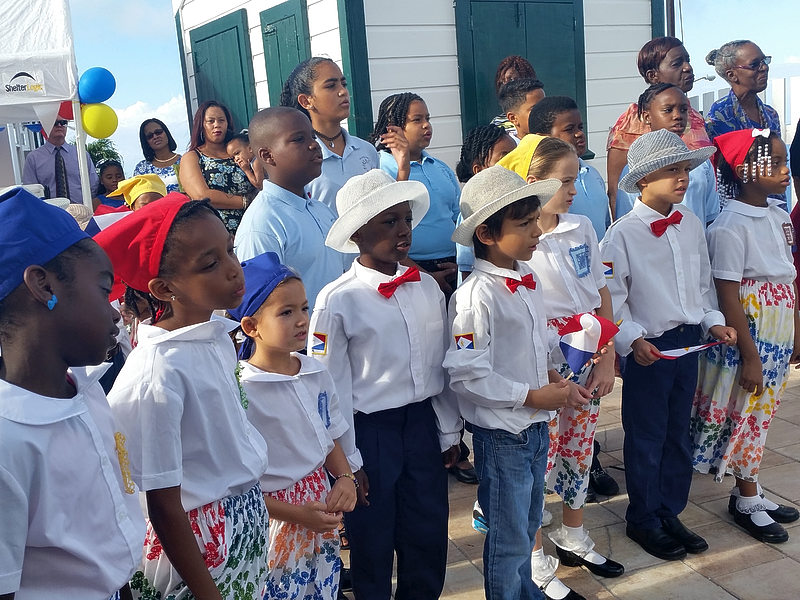 In his official address for the 41st celebration of Saba Day, the Governor took time to thank the Almighty for sparing the island from any major natural disasters in this year’s hurricane season, which came to a close on November 30.

In looking back and at the same time looking forward to the future, Johnson said that Saba is changing, as is the world.

In referring to the introduction of cellular technology and underground cabling, he said the island had invested “tremendously” in infrastructure.

“At the same time many feel that we have lost some of our charm…When we look back we do need to hold our memories dear, we also need to make new memories. We need to empower and support our young people to be resilient and hard-working. Nothing that you see on this island came easy. We need to nurture and mould the future so that they can take the mantle over,” Johnson said.

On Friday, Commissioner Bruce Zagers said this was the 10th consecutive time he delivered a speech for Saba Day, but no longer as Commissioner of Culture. In this regard he applauded his new colleague in the Executive Council Rolando Wilson for his efforts and also wished him much success for the remainder of Saba Day.

In his speech, Zagers marked the 40th anniversary of Saba Comprehensive School, and commended the school for achieving basic quality standards in primary, secondary and adult education.

In June, Zagers took over the tourism portfolio. Talks with local stakeholders taught him that Saba needed to refine its current tourism product, look for new opportunities and find investors who could help develop tourism.

He also pointed to the dangers of rushing to Facebook and other forms of social media, “to report the good, the bad, the conspiracy theories, the triumphs and the failures of Government, private foundations, and even individuals.”

Dutch Government Representative Gilbert Isabella said the regular consultations, discussions and meetings between Saba and the Netherlands were “sometimes frank on content but never tarnishing the relationship.”

He said the discussions based on the Evaluation of the Spies Report had led to parties finding “a satisfactory middle point.”

Isabella said that Saba continues to demonstrate where its strength lies. “Your message is very clear: “We want to do it our way but within the existing laws and regulations and we will seek the support of the Netherlands where necessary.”

He said parties will continue to work on the development of the Multi-Year Development Plan. “The Ministry of Home Affairs and Kingdom Relations is working with the local Government to develop and implement an integral plan with economic development, poverty reduction and the Rights of the Child as the main thrust.”

Also in this regard Saba is taking its own initiative, Isabella said, which include attention for the youth and elderly on the island, and in searching for economic development to further strengthen and expand the local economy.

He commended the recent drafting of the Tourism Plan and several initiatives in the local business sector.