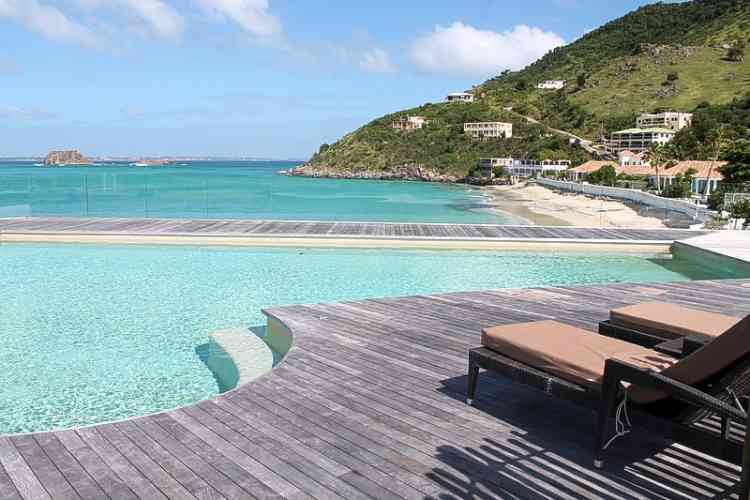 MARIGOT–Seeing the scale of destruction wrought by Hurricane Irma on Grand Case Beach Club fourteen months ago, it seemed inconceivable then that the hotel could recover in a year’s time, yet the hotel has managed to open 48 of its 72 rooms as of November 15, 2018.

Not only has two-thirds of the hotel re-opened, ocean-front rooms have been completely refurbished, with new décor and furnishings by designer Paul Klimenko, 43-inch TVs, and all complemented with Roland Richardson art work.

It is a remarkable feat of commitment by management and staff to get to this point, but much work still needs to be done to open remaining rooms and other facilities.

Grand Case Beach Club joins L’Esplanade, which opened on November 1 with 26 rooms, while Blue Emeraude remained open throughout. It is good news for the restaurants of the Boulevard in Grand Case, which depend on the patronage of loyal hotel guests.

No one could be happier over the outcome than Grand Case Beach Club’s General Manager Steven Wright and the 50 employees left in a holding pattern for much of the previous 14 months.

“We’re thrilled to be open again,” beams Wright over a coffee in the rebuilt Sunset Café, open again for breakfast, lunch and dinner. “The 48 rooms are in the three buildings facing the water. The remaining two buildings are not yet ready, but they will also get the full refurbishment in due course, including design and interiors.

“Guests have been coming in slowly. We didn’t want to do a grand re-opening. The 48 rooms are practically all occupied and next week will be the same. After Christmas and beyond we expect to be full continuously.

“It was essential for the community that we open; there are 50 employee families that depend on the hotel’s income and the whole village of Grand Case relies on the business that comes from the Club. The best way for us to recover is to get back in business.

“We make a point of telling guests how it is before they arrive. Guests understand that they are part of the recovery process, which we hugely appreciate as we will not be done for some time yet. Some of the guests are like old friends. They even work while they are here, picking up or cleaning. It’s very gratifying to see people so committed to the hotel.”

Wright explained that the hurricane had presented an opportunity to refurbish the rooms, but they were on schedule to be refurbished anyway. With regard to facilities, a water-sports concession is open and the undamaged Petit Plage Beach looks as inviting as it always was, vying for attention with the fabulous re-opened swimming pool. The glass and safety railings around the pool were smashed during the hurricane, but have been replaced. The same glass and railings will be installed at Sunset Café.

Infrastructure improvements have also been going on at the hotel. A new wastewater treatment plant financed by European funds is soon to come on line and the hotel is applying for more EU funds for its projects.

Wright has no complaints about the settling of insurance claims.

“Our adjusters and insurance companies were partners in the situation. I have nothing but praise for them. But what has been difficult has been the supply chain – getting materials to the island in time. Concrete, for example, was not available for certain periods. There has been a huge demand on contractors and prices skyrocketed. That was the challenge that held us up. Originally, we thought we would be able to be open by June 2018. That was then moved to October and then to November.”

One concern Wright has is with streetlighting and the state of the road and Boulevard, as guests like to stroll down to the village from the hotel. “We are told the Collectivité is working on it, but nothing has happened yet and it is something we are very concerned about.”

Wright believes opening the hotel now with a flourish and working hard for positive feedback will help instil confidence for the next low season, traditionally a very good time of year for the hotel, but since Irma that season has become uncharted territory.