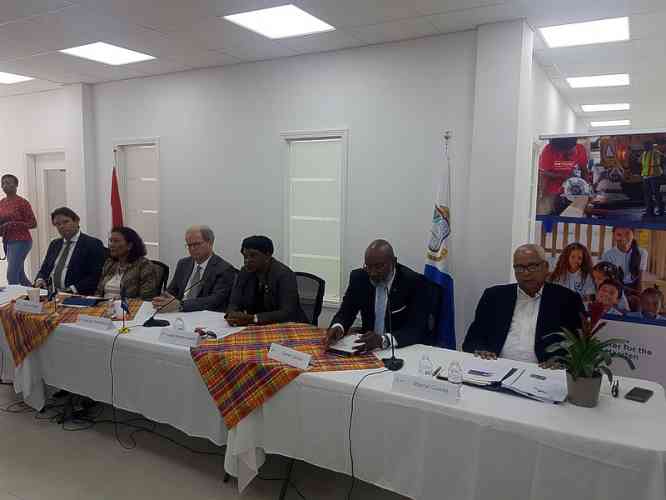 POND ISLAND–Land has been identified for relocation of nineteen families living on sections of the landfill.

Spatial Planning Minister Miklos Giterson said on Friday that the land is in Foga, a short but safer distance from the often-flaring-up dumpsite. Prefabricated hurricane-resistant houses are being sought by the National Recovery Programme Bureau. When procured, families will be assigned dwellings.

It is now up to the families to agree to the move. Families also have the option of receiving funds and finding their own dwellings.

The relocation of some 30 people from the dump is critical to the fire suppression and other projects related to solving the country’s severe waste-management problems.

Giterson said government is working together with World Bank and other officials to change the dump “red zone” to a “yellow zone”. However, this will take time.

The solving of the solid-waste issue is one of the projects to which a portion of the Dutch financed, World Bank administered Recovery Trust Fund has been allocated. This means the World Bank, government and residents will finally see a change on the horizon when the way forward is found and approved by the Trust Fund Steering Committee.

However, the timeline for this badly needed project is not clear.

New World Bank Vice-President for Latin America and the Caribbean (LAC) Axel van Trotsenburg said as he ended a two-day visit to St. Maarten on Friday that the dump “requires a good solution,” but that it would be “wise” for government to have all options before proceeding in any direction.

The dump and tackling the severe housing repair issue post-Hurricane Irma are not simple fixes, he noted. This was backed up by Prime Minister Leona Romeo-Marlin. She said fixing each house has its own challenges, from whether or not the owner is involved to whether the house was constructed with the right permission. She added that government, with or without the trust fund, cannot fix all damaged homes.

Van Trotsenburg said of the housing repair programmes financed via the trust fund and from early recovery monies from the Netherlands that it was the first time he had seen such a “gift” given to repair individual homes.

Van Trotsenburg and Romeo-Marlin held a press conference in the Recovery Bureau office to close off what was classified as a “high-level” World Bank visit to the still-recovering Hurricane Irma-ravaged country within the Dutch Kingdom.

All officials said they shared “a certain sense of impatience” with the pace of the recovery efforts and are working to speed this up.

“It has not been an easy road. … We have come a very long way” since Irma in September 6, 2017, said Romeo-Marlin. Updating on projects, she said needed equipment for the Fire Department ahead of the hurricane season is on the way and a programme to extend small loans to businesses is in the works. All of this is covered from trust fund monies.