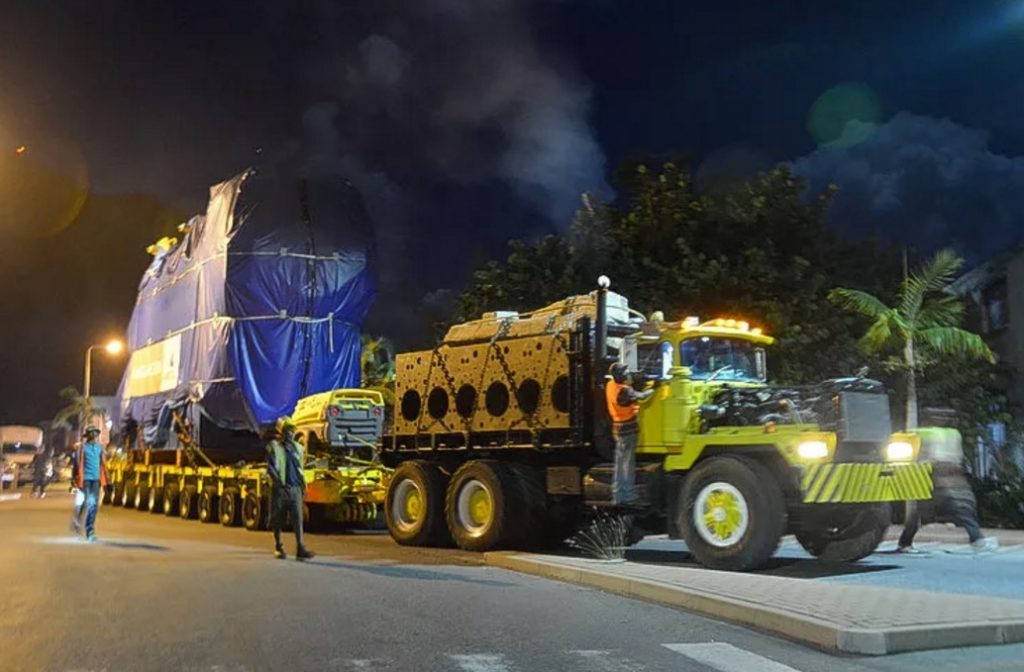 CAY BAY–The relocation of utilities company GEBE’s new diesel generator (Engine 20) from the Port in Pointe Blanche to its final location at the production plant in Cay Bay on Sunday morning was successful and incident-free.

The entire process took several hours – from around 12:00 midnight to about 4:00am Sunday. “The challenges were minor. Because the cables are underground, that helped in speeding up the process compared to previous moves where cables along the route had to be removed before,” Chittick explained.

He said the primary challenge had been moving the generator up and down A.J.C. Brouwer Road (Cole Bay Hill), but noted that this also had been a smooth process.

“The relocation was entirely the responsibility of the contractor, who hired a local company to do the move and the company had their crew on hand. … GEBE assisted where needed. The next step is to lift the engine from the trailer into the engine hall. This will be done using hydraulic lifting tools. Once in the engine hall, the engine and generator will be coupled to each other. Once coupled, the unit will be fastened to the foundation. The electrical and finishing piping works are pending completion,” he said.

The new engine is set to go online in mid-December. The new 11.2-megawatt Wärtsilä engine arrived in the country on September 15. The engine was offloaded at the harbour under the supervision of Wärtsilä technicians and GEBE’s Interim Managing Directors Chittick and Iris Arrindell. The generator will replace aged units that have “plagued the company for the last few months with increased maintenance,” GEBE had said at the time. The newest phase of the power plant will help the water and light company continue to meet the increasing demand.