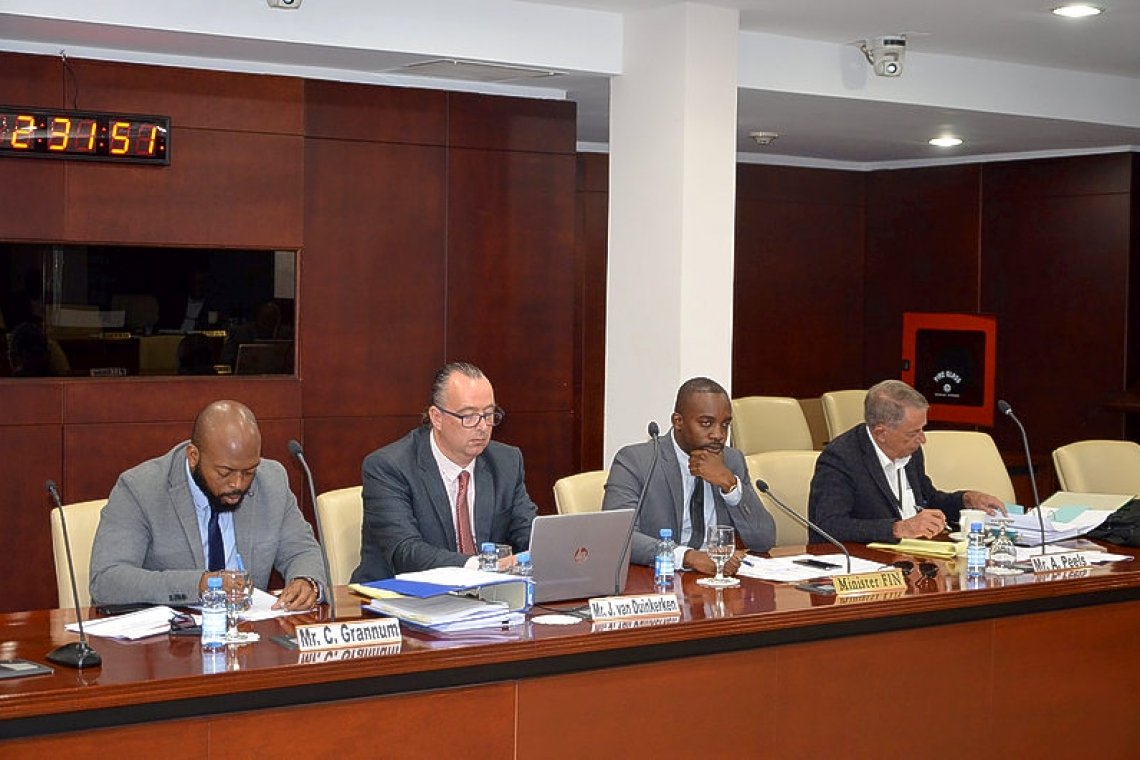 Finance Minister Ardwell Irion (third left) with members of his delegation in Parliament on Wednesday.

PHILIPSBURG–The remaining funds that St. Maarten will receive from the sale of the country’s 12.5 per cent shares in United Telecommunications Services (UTS) will be used to reimburse the treasury the monies forked out in January to pay justice workers part of their back-pay.

At the time, he was responding to a question from an MP. Irion said to be able to pay the justice workers the remainder of their back-pay “the function book and rest of the law needs to be in order”. He stressed that the remaining UTS sale funds, the amount of which was not disclosed due to a non-disclosure agreement, will be put into government’s general coffers.

A total of NAf. 1.9 million from government’s treasury was used to pay around 250 justice workers part of their retroactive payment in January. The payment began around January 10. The decision was made to pay the workers via the treasury and not delay any longer. The first tranche of the settlement from the UTS sale was paid on September 10, 2019, which amounts NAf. 9.2 million (9, 206, 975, 34). Although, MPs wanted the payment of justice workers to be prioritised with the funds, the first tranche went toward settling a debt at TelEm.

Giving a brief overview of the agenda point, Irion said the first step in the process for the sale was MP Rolando Brison’s initiative law of September 3, 2019; which was a national ordinance authorising the sale of UTS shares. On September 9, 2019, a contract was signed between UTS and St. Maarten. On October 22, 2019, the Council of Ministers approved the draft national ordinance amending Brison’s initiative law authorising the sale of the shares to be forwarded to the Council of Advice. On November 5, 2019, the council’s advice was established.

On January 7, 2020, the Council of Ministers approved the further report (Nader Rapport); the draft national ordinance amending the national ordinance authorising the sale of UTS shares to be proceeded to Parliament. The latter was discussed in Wednesday’s meeting.

The issue at hand is that Brison’s initiative law stated that the minimum price for the sale cannot be less than NAf. 20 million. However, the contract signed after the initiative law does not make mention of a minimum price. Instead, the contract mentions that there is a “headline purchase price”, which has to be adjusted to a “final St. Maarten purchase price”, which was not known at the moment of signing, because calculations had to be made.

Questions were raised as to what exactly was meant with the term “minimum price” in the national ordinance and whether this should be a minimum price before or after purchase costs. According to the contract, this uncertainty had to be clarified by amending the wording in the national ordinance authorising the sale of the shares, Irion noted. “With this draft amendment, the ordinance will be aligned in accordance to the contract,” Irion explained. “With this draft amendment, it is clarified that “minimum price” as stated in the initiative law, is the same as “headline purchase price” as stated in the contract, in which price will be adjusted after the transfer date for debts, costs and changes in the working capital of UTS to determine the “St. Maarten purchase price” .

A first tranche of the settlement was paid to St. Maarten on September 10, 2019 after the signing of the contract. The contract stipulates that there is a holdback amount (buffer) of which the pay-out amount depends on the agreement between Curaçao’s government and the buyers on the final purchase price calculation for all UTS shares. This buffer will be used for the settlement of any result of the calculation of the St. Maarten purchase price.

A few MPs posed questions during the meeting, most of which Irion answered at the meeting and the remainder of which will be sent in writing.

A public meeting on the draft is expected to be held where MPs will get a chance to vote on the proposed amendment.

March 5, 2021
0
The stranded boat. WILLEMSTAD--Wednesday at 7:00pm, a report came in via VHF to the Dutch Caribbean Coast Guard’s Rescue & Coordination Center (RCC) at Parera that the vessel FENIX near Klein Curaçao had problems with a heated engine.   RCC...
Read more