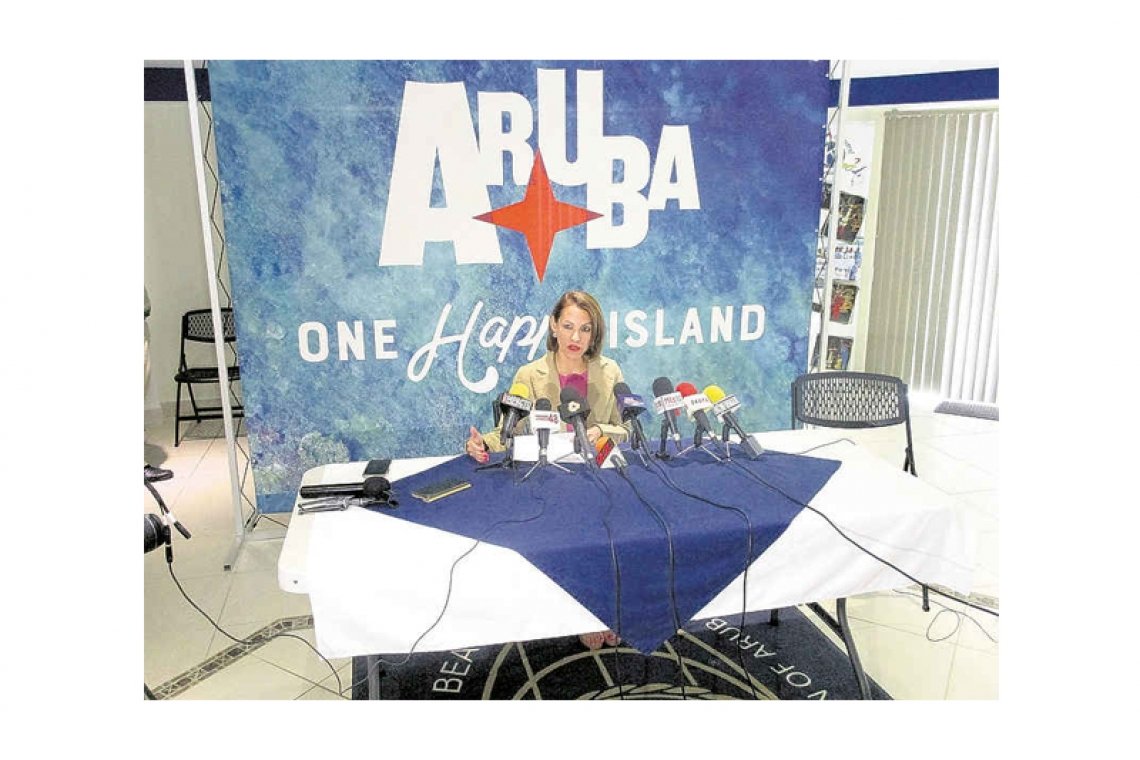 The enforcement of Aruba’s “Health & Happiness Code” will be strengthened, announced Aruba Tourism Authority (ATA) director Ronella Tjin Asjoe-Croes. This will be done with anonymous tip lines and unannounced controls. Businesses found in violation of the COVID-19 protocol twice will lose their “seal of approval” indicating compliance with precautionary measures. A total of 2,371 “coloured” seals were issued and in 108 cases upgraded to the “gold” version after surprise inspections.

ORANJESTAD–Aruba expected to reach the 10,000-passenger mark on Tuesday since the reopening of its borders on July 1 for Europe, Canada and the Caribbean, and for the United States (US) on July 10.

So far, five tourists have tested positive for COVID-19.Director of the Aruba Civil Aviation Department Edwin Kelly announced during a press conference earlier this week that from July 1, a total of 9,123 passengers had arrived in Aruba. Of this number, about 7,000 were tourists.The past weekend, Friday to Sunday, July 17-19, were three busy days with 2,843 arriving passengers, of which 2,156 were tourists, said Kelly. The previous weekend was also busy.

The 7,000 tourists were more than originally anticipated.Kelly said that the processing of arriving passengers went well under the circumstances and that it took one hour and 13 minutes on average to process a passenger from the moment of arrival until the departure from the airport by taxi. “We will keep working on improving the passenger flow.”Chief Executive Officer (CEO) of the Aruba Tourism Authority Ronella Tjin Asjoe-Croes said that after the reopening of the borders, Aruba registered a total of 12 positive COVID-19 cases, of which five were tourists. Prime Minister Evelyn Wever-Croes said the five tourists were isolated and that none required hospitalisation.Tjin Asjoe-Croes said that Aruba has had a very strict policy in place for arriving passengers, and that thanks to these measures the number of positive cases was limited. People who want to go to Aruba need to do a test 72 hours prior to departure, or must be tested upon arrival and accept that they will go in quarantine until the test results are in.

Also, passengers need to fill in a declaration on a special immigration platform, their temperature is taken upon arrival and they need to purchase special insurance prior to departure. Passengers from high-risk areas, such as Florida, must take a test prior to departure and are not allowed to board without a negative test.“We are adhering to 100 per cent testing. It is strict, but necessary for it is a delicate balance between reopening for tourism and the safety of visitors and the local community,” said Tjin Asjoe-Croes. She said that a questionnaire among visitors showed that a majority supported the strict measures, which include the closing of nightclubs at 11:00pm.

Prime Minister Wever-Croes called upon the nightclubs and other establishments that are open in the evening to close their doors at 11:00pm. She criticised the “irresponsible behaviour” of some establishments which over the weekend remained open longer than allowed.

Referring to other countries in the world where nightclubs have reopened and where the number of COVID-19 cases has increased, Wever-Croes said that the Aruba government wanted to prevent this from happening on the island. She said the nightclubs needed to take their responsibility, stick to the law, and if they did not, police would close them down. “We must all adhere to the discipline and the rules.”