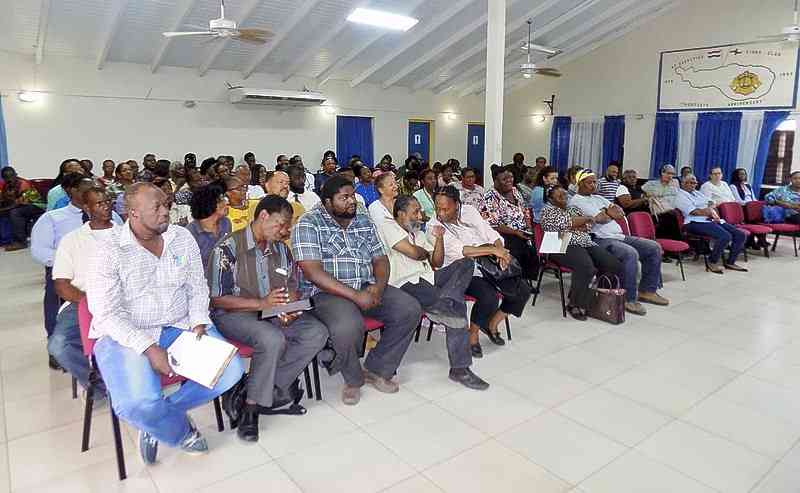 ST. EUSTATIUS–A public notice went out from the Public Entity St. Eustatius stating that all government offices would be closed 2:00pm-5:00pm, due to the public entity holding its first general meeting with civil servants to explain plans to reorganize the civil corps.

At the meeting, which was held at Mike van Putten Youth Centre/Lion’s Den, the civil servants learned that the reorganization of the civil service is scheduled to take effect on July 1.

Deputy Government Commissioner Mervyn Stegers explained that the ambition is to build a new organization that is resilient and well-equipped to provide quality service to the Statia community.

The main guiding principles of the reorganization are to ensure that the placement of civil servants will take place carefully, fairly and transparently; that the placement of civil servants in permanent employment does not lead to dismissal by default; that employment will continue until the end date as stipulated per decree for civil servants employed on a temporary basis for a fixed period; and that direct replacement will be determined based on the “principle of reflection” (“afspiegelingsbeginsel”) as stipulated in Article 91 of the Legal Position Civil Servants Decree for Bonaire, St. Eustatius and Saba (“Rechtspositiebesluit Ambtenaren BES”), which is considered a transparent method for proportional reorganizing. The new organization envisions approximately 40 changed positions and 40 non-returning positions. The Public Entity St. Eustatius currently employs 167 civil servants.

According to government commissioner Stegers, this development gives civil servants the opportunity to develop, as all function levels of civil servants will receive general and specific training related to their function.

If direct placement is not determined by the proportional method used, customized courses with a development plan will be offered based on the individual’s potential for development.

If over a reasonable time frame the attempts for development prove to be unsuccessful, the option of an alternative function, and ultimately dismissal, will be explored, Stegers explained.

He said the implementation of proper procedures and processes are key to a successful reorganization of the civil service. “We intend to be transparent and careful throughout this process. This can be achieved only if we work together in a reasonable manner. Time is of the essence, but I am also cognizant of the fact that this is not a process that should be hurried off as training and retraining may take just a few months in some cases, or years in other instances,” said Stegers.

Three follow-up meetings concerning the reorganization are to be held in June. An advisory committee will be put in place to ensure decisions made are proper, fair and transparent.