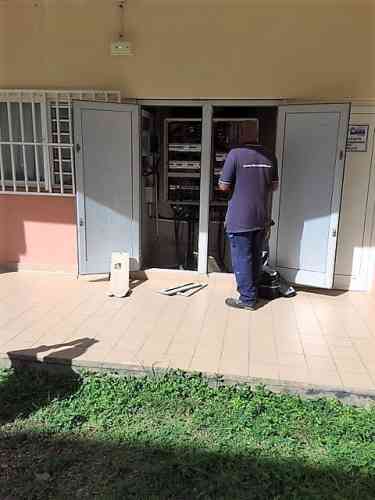 Several phases of work have been carried out at the request of President Daniel Gibbs and under the supervision of Vice-Presidents Annick Pétrus in charge of education and Steven Patrick in charge of sustainable development.

Electrical installations at the Lycée in Concordia have been repaired in the kitchen, carpentry and electro-mechanical workshops to enable students to practice their subjects for future exams. Waterproofing problems that existed before, have now been solved.
Electrical repair work will continue at other establishments. Eight classrooms in Siméone Trott nursery school have been renovated. The children were able to return to class on January 22.

Renovation work is also underway at École Emile Choisy, and should have been completed by the end of January. In the case of Hervé Williams and Nina Duverly Schools, arrangements have been made by the Collectivité and the school Principals to avoid the rotation of elementary schools and to opt for a return to normal hours of operation, meaning only two schools will still operate with arranged schedules.
Cité Scolaire Robert Weinum in La Savane, which houses a College and a high school, is also the subject of renovation work. Four classrooms will be refurbished (roofing, wall separation and electricity) and replaced by four new classrooms opened at the end of January in temporary modules.

The gym and gymnastics room of the school city are operational. The Collectivité has closed the football field which will be usable again after work is completed. At all schools, and in general, the Collectivité is using its technical services or companies in the context of public contracts, so that the students’ education and the work of educational teams are carried out in the best security conditions given the situation.

As a reminder, the Collectivité has markets in several areas of expertise (carpentry, plumbing, electricity), but remains under the obligation to obtain quotes from companies holding these markets and this can cause a delay in getting work completed.