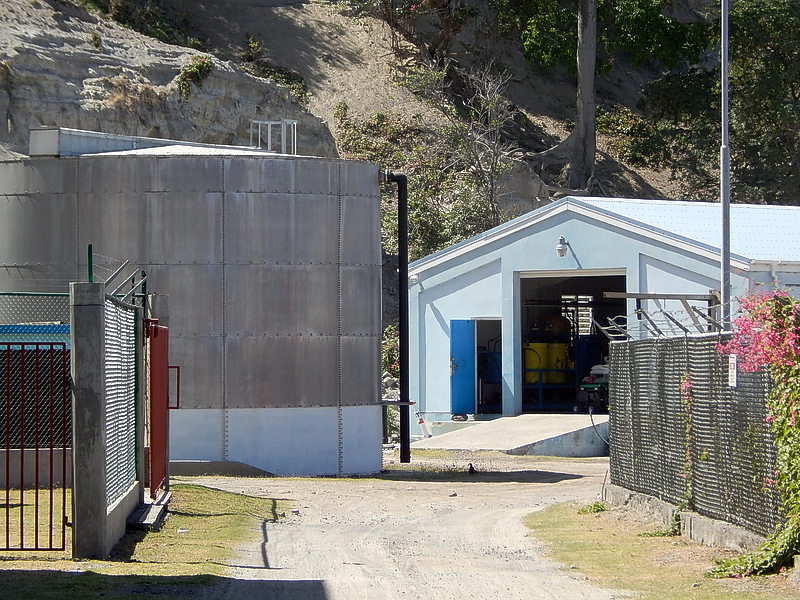 ST. EUSTATIUS–Replacement of the two water tanks of St. Eustatius Utility Company (STUCO) has been postponed until June. Due to the projected period of drought and despite the rationing of water outside of the 5:00-8:00 morning and evening hours, the company is unable to build the storage-tank level satisfactorily at this time.

Consequently, STUCO decided to postpone the required change-out of their two water tank liners, which was scheduled over a two-week period from April 17 until June 2017.

The water rationing will continue until the levels in the tanks are satisfactory to attempt a repair. With this the company hopes to mitigate the likely possibility of completely running out of water.

STUCO’s Head of Distribution Reuben Lopes stated that the tanks have exceeded their lifespan.

“We were trying to switch them out last year, but the company that does this type of work does not travel in this area during the hurricane season.”

In giving an update about the “grave concerns with respect to the availability of water” Lopes said they have to get the tanks fixed before the hurricane season starts, otherwise they will have to wait another year to switch them out.

The tank on the Bay is leaking excessively. STUCO already patched the tank at Lodi a few times in the past. “We have to change them out,” said Lopes.

This is the first time they are replacing the tanks. Therefore, it is unknown how long the operation may take but the water may be off continuously for several days.

The company that is coming to switch-out the tanks estimates that it will take a few days to get the work done. Workers were expected to arrive on Easter Monday.

Lopes said that STUCO was hopeful that the Lodi tank would be able to sustain the island for a few days, but because of the drought and people using more water than the company can produce, the water level at the Lodi tank was not sufficient. Therefore, they put off their plan A and are now on plan B.

He said STUCO is observing the water levels in the tank, but they had a few breakdowns in the water plant and were unable to produce any water. The breakdown caused STUCO to lose some of the water they produced, which made the levels in the storage tanks go down even lower. The utility company had planned to start working on the tanks directly after Easter, but levels in the tank were insufficient.

In the meantime, Lopes advises persons wishing to wash their clothing to use well water as the wells on the island are still producing water, or use water from their cisterns instead.

Lopes said that he planned to visit the schools to make sure everything was in order in relation to the water situation.