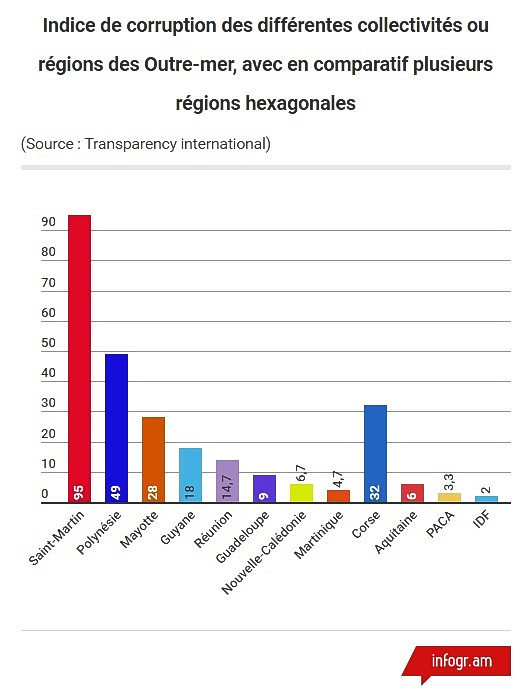 MARIGOT–A report by Transparency International on February 14, 2017, claims St. Martin and French Polynesia are the most corrupt overseas territories of France.

Using an interactive map the organisation listed 660 cases of corruption in France, including the overseas territories. It took into account only cases where convictions were handed down. The principal offences were conflicts of interest, embezzlement of funds and public goods, and procurement or fictitious employment cases.

For its findings, Transparency identified the number of convictions and divided that by the gross domestic product (GDP) in each of the territories. By virtue of its small population relative to number of convictions St. Martin comes out top with a score of 95. The report cites five convictions in St. Martin. French Polynesia comes in second place with a score of 49. Corsica is mentioned as the most corrupt region with a 32 index.

Saint-Pierre et Miquelon and Wallis and Fortuna were not included in the report because of the low number of convictions, one for each Collectivité.

The five St. Martin convictions occurred in 1997, 2004, 2005 and two in 2010, and involved former elected officials of the Commune era and civil servants holding public office.