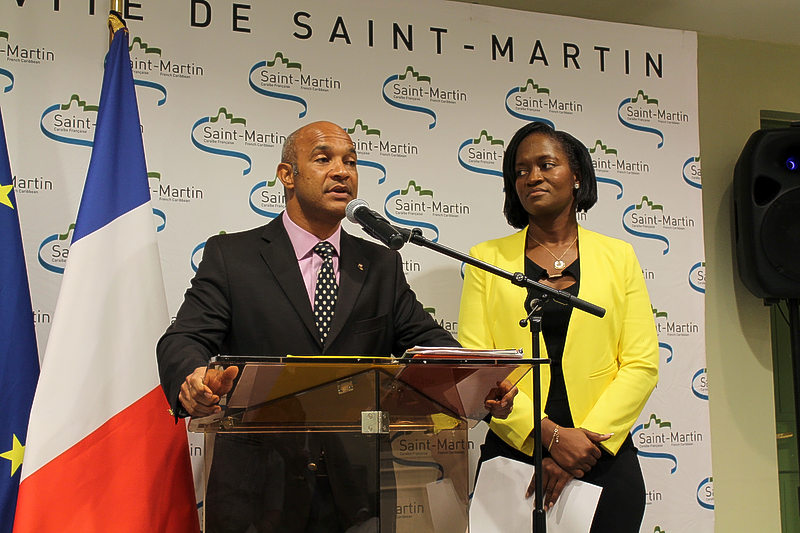 MARIGOT–President of the Collectivité Daniel Gibbs on Wednesday gave the first of what will be regular press briefings and question-and-answer sessions for reporters following decisions made in Executive Council meetings.

He was accompanied by First Vice-President Valérie Damaseau, who is the official spokesperson for the local French-side government. She will be sharing the spokesperson duties with Jean-Sébastien Hamlet.

Gibbs began by giving a reminder of the portfolios of his Vice Presidents, and reiterated his decision not to take responsibility for any one department, as his predecessor Aline Hanson had done, but assumes overall responsibility of all departments.

He said his “direct” responsibilities included the Police Territorial, European and National relations, and local and regional co-operation.

Talking of the actions already accomplished since taking office on April 2, these included completing protocol visits to the dignitaries in Sint Maarten, Anguilla and St. Barths.

He talked of a new tourism strategy at the tourism office, where Valerie Damaseau is the President, though details have not yet been disclosed. An administration board for the tourism office was installed just recently. The first steering committee meeting was held last week.

On reform of fiscality, a bid will shortly be launched to select a cabinet of experts to devise a simpler and fairer fiscal system for the Collectivité. The Programmation des Investissements (PPI) on five and 10 years will allow for a better management of public finances, greater transparency for citizens, and a more efficient public action.

“Before reforming the fiscality we need to do a certain number of audits, to see what is right and what is wrong, as well as reorganising our services,” he explained. “We will audit our institutional affairs, because we are in a European setting which is not allowing us to prosper in terms of economic development unlike our neighbours Anguilla and Sint Maarten, who have Overseas Country and Territory (OCT) status. We have to question ourselves on that. But we will not take decisions without informing the population on the issues.”