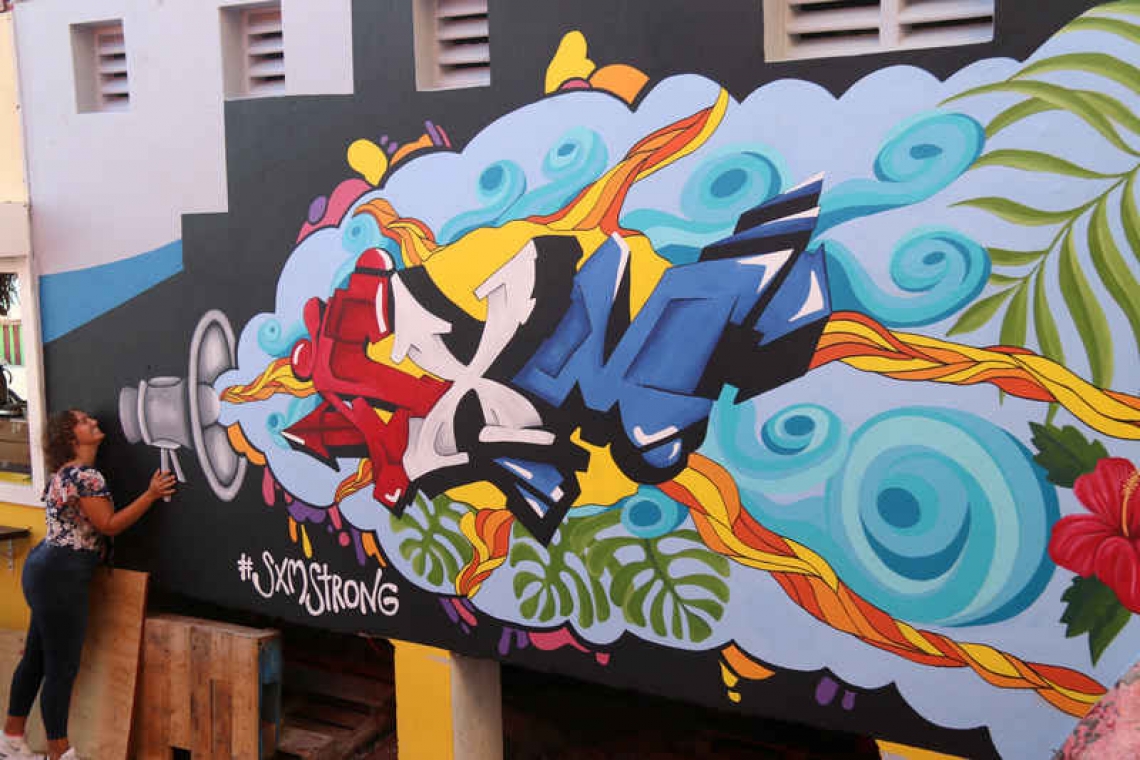 PHILIPSBURG–Be The Change Foundation proudly presented a “sneak peek” into its “@colormesxm” mural project to participating artists, partners and sponsors. In recent weeks, the twelve participating artists and their volunteers put in lots of hard work to help bring colour and art to Philipsburg, and their results were unofficially “unveiled” on Friday afternoon.

Present for the official kick-off of the mural project were Minister of Education, Culture, Youth and Sport (ECYS) Rodolphe Samuel and Minister of Tourism, Economic Affairs, Transport and Telecommunication (TEATT) Ludmilla de Weever.

Also in attendance were Director of Tourism May-Ling Chun, Head of the Culture Department Clara Reyes and Secretary-General for United Nations Educational, Cultural and Scientific Organization (UNESCO) in St. Maarten Marcellia Henry, as well as representatives of sponsors and silent partners such as the Prince Bernhard Culture Fund Caribbean Territory, Sherwin-Williams and La Vista Resort.

They were all welcomed at Caribbean Brewing Company – where the tour of murals started and finished – by Be the Change Foundation President Melanie Choisy and mural project manager and coordinator Laura Bijnsdorp.  The project aims to add colour and art to St. Maarten through murals, seeks to promote local art and artists, and encourages residents and visitors to explore less-visited areas and to share the island’s beauty through photographs on social media platforms.

The first phase of the project focusses on Philipsburg, primarily on Front Street, Back Street and the connecting alleyways.Artists, dignitaries and sponsors of “@colormesxm” gathered at graphic designer Fiel Efenio’s mural on Front Street. (John van Kerkhof photo)<img src=”/images/2020/07/14/page8b045.jpg” alt=”” />

“We hope that this project brings some positive news in the turbulent 2020 we are having so far. It is great to hear all the motivating feedback, and we hope the 12 murals bring a smile to your face when you see them,” said Choisy.

“Painting helps me to express the thoughts and feelings I cannot communicate verbally. With this mural I wanted to express the things that make St. Maarten (SXM) paradise to me. Hold the megaphone and shout out why you think SXM is paradise,” said Verheij, who at age 16 is the youngest among the participating artists. Her design can be found on an alley wall close to Boardwalk Boulevard.

Nine of the 12 murals are already complete, and the remaining three will be finished in the coming weeks. Informational signs will be placed near the murals which will be connected through a downloadable art walk for tourists, visitors and residents, urging them to head over to Philipsburg to check out the pieces of street art, take pictures and tag these on Be the Change’s Instagram and Facebook accounts @colormesxm.

Since 2012, Be The Change Foundation executes a number of community efforts throughout the year to support volunteerism and the work of other non-governmental organisations. SXM Doet, scholarships, small grants and beautification projects are a few examples of the foundation’s initiatives over the past years.The trolley train took the participating artists and invited guests past the murals in Philipsburg. (John van Kerkhof photo)<img src=”/images/2020/07/14/page11h045.jpg” alt=”” />