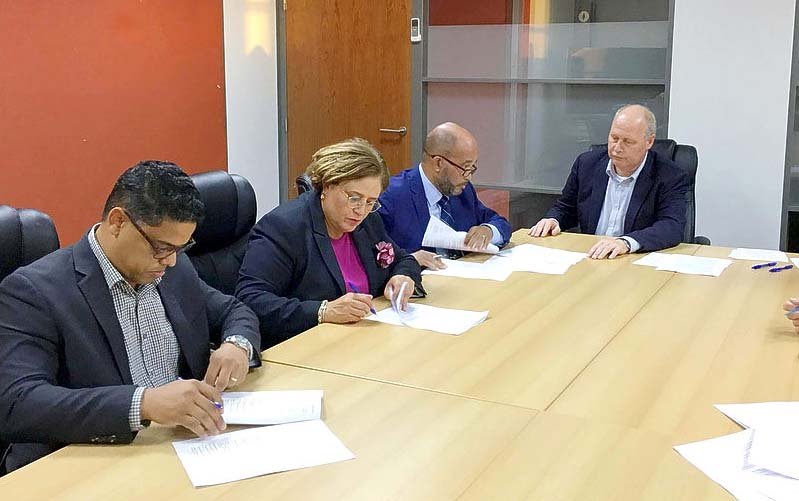 WILLEMSTAD–The Government of Curaçao says it joined forces with the shareholders and management of InselAir “to safeguard the vital air links for the island by ensuring that aviation company InselAir is financially and operationally healthy and strong,” stated a press release.

Last weekend the local carrier signed an agreement whereby government, with certain guarantees and conditions, provides a loan to InselAir. Both parties said they are confident that the arrangement, which follows very intensive discussions, provides a good basis for the intended goal.

“For the public, it is paramount that the access to other nations is guaranteed, whereby security is of primary importance. The Curaçao economy and employment in particular are heavily dependent on reliable air links, including with neighbouring countries.”

Under this agreement, government is granting a loan of 33 million Antillean guilders (US $18.6 million), payable in instalments depending on the implementation of a stabilisation plan. As security for this loan, government obtains a claim on 51 per cent of the shares in the operating companies of InselAir, acquiring all normal shareholder rights without becoming co-owner.

Government and the current shareholders of InselAir now have two Supervisory Board members each. The fifth and also chairman is jointly appointed and will be held by economist and former Finance Minister José Jardim.

“On the basis of his financial expertise and management experience he can make a meaningful contribution to the restructuring of the company,” added the release.

The management team will be strengthened by two directors nominated by government. These are the President and the Chief Financial Officer (CFO). The president leads the management team and represents InselAir.

Gilles Filiatreault has been appointed as such. He has an extensive international track record in the aerospace industry.

Filiatreault has practical experience in his native Canada and in the US, Central- and South America, the Caribbean, Eastern Europe and West Africa. He specialises in the start-up and restructuring of airlines, both passenger and cargo.

Management must have a stabilization plan ready by late February to show how the operations of InselAir should be normalised in the near future, resulting in a profitable business.

On the basis of this plan parties agree to the transfer of certain amounts parallel to its implementation. The first tranche of NAf. 3 million was paid in advance during December and a second tranche of NAf. 5.6 million will be paid for the month of January.

Under the agreement management must also present a business plan within three months and it has to be approved by the Supervisory Board. This document will include the strategy and the operational and financial objectives for the next three years.

Government will maintain the InselAir Committee chaired by former Antillean Prime Minister Etienne Ys set up to deal with this matter. The committee will, on behalf of government, supervise the implementation of the agreement and advise the Council of Ministers.

Parties are confident that this agreement is a good basis to ensure the important air routes. They say the travelling community can also count on a reliable and safe airline.

The board also includes Lars de Brabander, who has extensive knowledge and experience in the aviation industry and was General and Country Manager for Martinair Holland and KLM in Curaçao, as well as Anthon Casperson, accountant and former CEO of utility company Aqualectra.

Also new on the management team is CFO Andre Delger, an accountant who was managing director at several major firms in Curaçao. His last position was CFO at Curaçao Airport Partners (CAP).