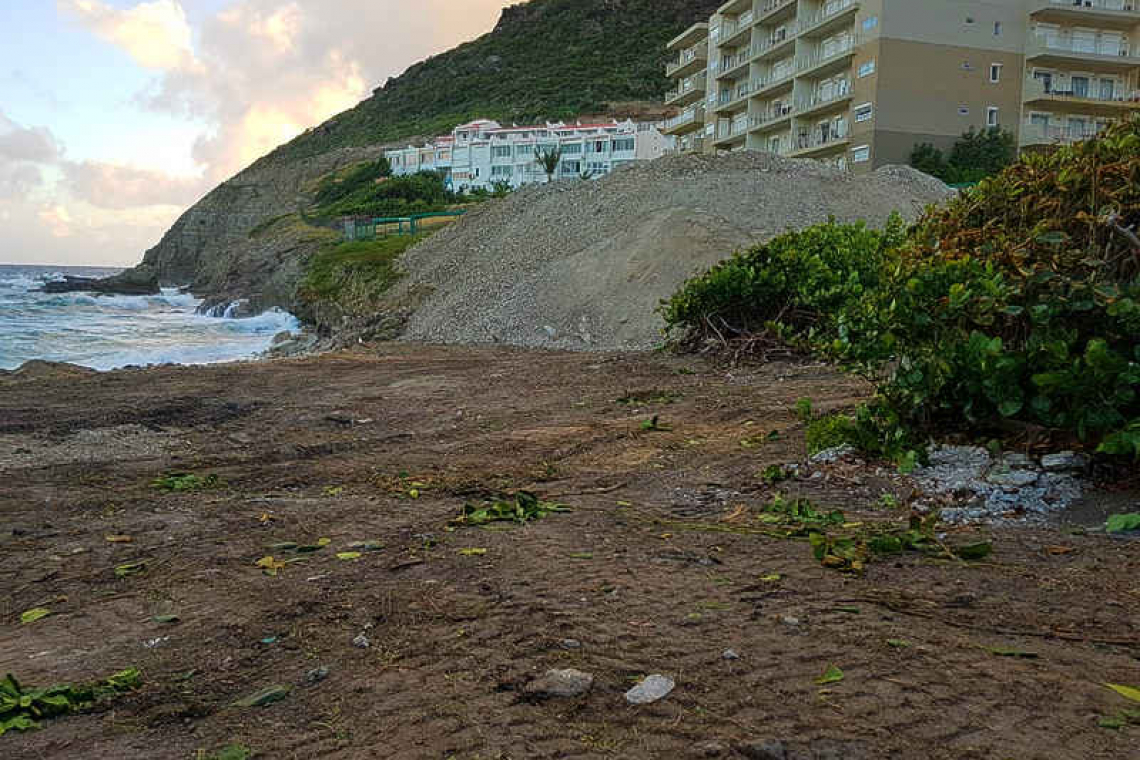 The work site on Monday evening, with clearly visible bulldozer tracks on the ground.

POINTE BLANCHE–Residents in the Pointe Blanche community have recently expressed concerns about large mounds of sand and gravel on a property in Pointe Blanche Bay, as well as heavy machinery being used close to the shoreline.

St. Maarten Pride Foundation, a local environmental and conservation organisation, condemned the activities in a Facebook post on Monday evening. “Stop destroying St. Maarten beaches and other coastlines,” it was stated in the post. “These activities are in clear violation of the Beach Policy, other policies and ordinances.”
The Daily Herald spoke on Monday evening with developer Luis Gioia, who says his company has owned the land since the 1970s.

According to Gioia, the heavy machinery is being used to clear the area of garbage and low-lying brush. Eventually some parts of the land are to be raised about one metre. The sand and gravel are for another project and are only being stored on the land temporarily.

Gioia said he had meetings with 10 of the property’s neighbours about the project and that the activities on the land are being done with all due diligence and following government procedures. He said Ministry of Public Housing, Spatial Planning, Environment and Infrastructure VROMI representatives had visited the site last week.

Aside from the country’s beach policy, the raising or levelling of land now requires a so-called civil works permit. This is as a result of Parliament unanimously approving the reintroduction of Article 28a into the National Ordinance on Spatial Development Planning in late July.

In the event that an area has no zoning plan, Article 28a requires that persons obtain a permit to conduct works that would excavate, fill in or level the soil; construct roads and pavements; cut down trees and other forms of cultivation; demolish buildings; and/or dam water or other activities that would affect water management and groundwater levels.

Article 28a also allows the VROMI minister to deny a civil works permit if the intended works and activities would raise serious objections from a public interest point of view due to their irreparable damage to nature, the environment or the land’s current and future use. The minister could also attach conditions to a permit to prevent these consequences.

This newspaper contacted VROMI Minister Egbert Doran on Monday afternoon for a comment. At the time he said he was not aware of the situation and would ask the relevant VROMI departments to look into the matter.