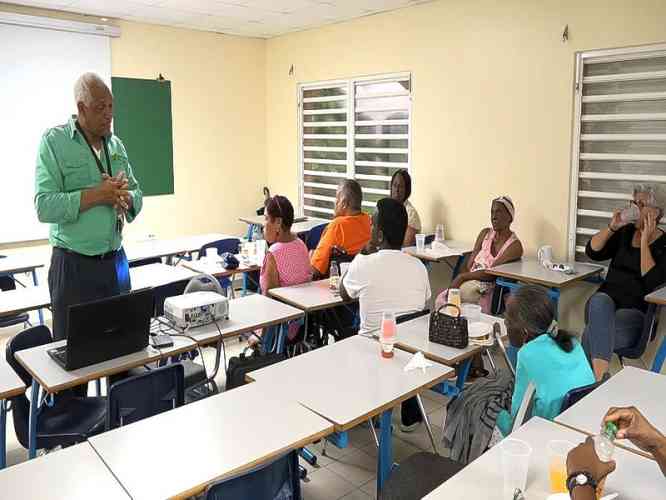 Raymond Jessurun and participants interviewed in the video documentary.

PHILIPSBURG–The St. Maarten Anti-Poverty Platform has launched a one-hour video documentary on the living conditions and the reality of the people in St. Maarten one year after Hurricane Irma.

The launch is in observance of International Day for the Eradication of Poverty today, Wednesday, October 17.

The launch was held at University of St. Martin (USM) last Saturday in the presence of persons who had been interviewed for the documentary and board members of Anti-Poverty Platform-affiliated organisations, before it is shown to the public.

The documentary can be seen this evening on TV Carib at 8:00pm and on St. Maarten Cable TV at 9:00pm. It will be repeated regularly in the coming weeks to stimulate reflection on the way forward with the development of the people of St, Maarten, the platform said in a press release on Tuesday.

The documentary is part of the platform’s awareness campaign to draw attention to and raise awareness about poverty in St. Maarten as a human rights violation in the Kingdom of the Netherlands.

By preparing the documentary and airing it on International Day for Eradication of Poverty, the platform said it has complied with the requirement of a United Nations resolution to observe the day. “It has enabled pensioners and workers to speak out for themselves on their living conditions so that they can be considered and included in the rebuilding of St. Maarten,” it was stated in the release.

For the launch, USM President Anthony Carmona welcomed invitees and offered the university’s support to follow up on the people’s development challenges raised in the documentary.

Anti-Poverty Platform co-coordinator and St. Maarten Chamber of Labour Unions (WICLU) President Claire Elshot in her opening speech thanked all present who had contributed one way or the other to the realisation of the documentary.

The challenges faced by families of pensioners and workers before Hurricane Irma became much more after Irma. Elshot mentioned price hikes and increased cost of living on the one hand and no increase in wages as well as drastic cuts in household income on the other hand. Many workers lost their jobs or were confronted with reduced working hours. “So, with less income to survive humanitarian help is still needed,” she said.

Anti-Poverty Platform co-coordinator and St. Maarten Seniors and Pensioners Association Vice-President Raymond Jessurun said the video has a lot of personal and official information. The platform hopes the video will bring an end to the poverty line discussion in the country. The platform also hopes to trigger international aid organisations to bring more humanitarian aid for the households in St. Maarten.

“One year after Irma thousands of households still need to survive and to build back better and stronger affordable hurricane-resistant homes,” Jessurun said.

The video production was made possible thanks to a financial contribution from Sentry Hill Community Aid Foundation.