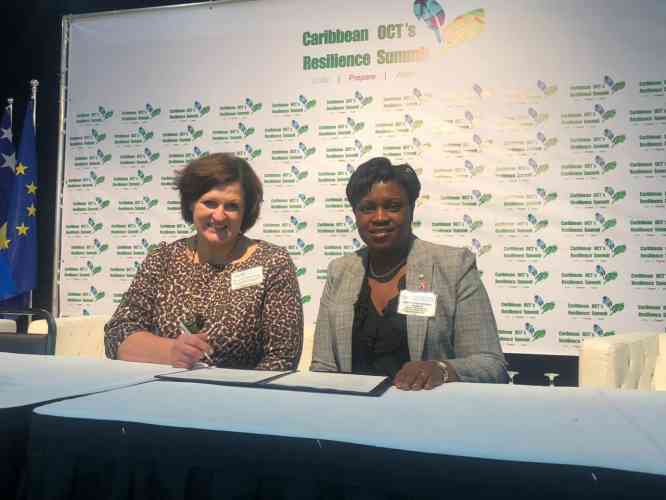 Thirteen Caribbean OCTs for which Prime Minister Leona Romeo-Marlin is the Regional Authorising Officer received approval from the European Commission for 40 million euros earmarked for the 11th EDF to focus on sustainable energy and marine biodiversity, with a horizontal component on enhancing resilience to extreme recurrent natural events.

Before signing the agreement, Marlin told attendees, “This event furthermore serves as an opportunity for signing the endorsement of the financing agreement by all OCT leaders and representatives, signing of EU [European Union – Ed.] and Expertise France delegation agreement and the signing of the EU and World Bank administration agreement.

“St. Maarten is proud to be not only recipient of the envisioned programme, but also that we can actively contribute to the execution thereof. Since February 2015, St. Maarten has been the official regional authorising officer (RAO) for the Caribbean OCTs. In this role, St. Maarten is ultimately responsible for the programming and implementation of the Caribbean OCTs Regional Programme 2014-2020.”

The overall objective of the summit was to also strengthen environmentally sustainable economic development of the Caribbean OCTs and include three components: energy, marine biodiversity and resilience.

“In June of this year, the final version of the Action Document of the 11th EDF Caribbean Regional Programme was submitted to the European Commission for approval.

“In the wake of the hurricane season of 2017 that left a number of OCTs with extensive damage, it was agreed to include a vital component on enhancing resilience to extreme recurrent natural events. It was recognised that, though not all OCTs are vulnerable to hurricanes specifically, we are all at risk of natural disasters such as heavy rainfall, earthquakes or volcanic eruptions.

“At the same time, we can acknowledge that one type of disaster may be more frequent and, as such, the OCTs have shown their unity by allocating a significant percentage of the funding to a component that may not benefit every individual OCT evenly,” stated Marlin on Thursday.

She added that this programme is important for the implementation of the Sustainable Development Goals (SDGs) Agenda 2030. In particular, four SDGs are covered. These are SDG 14: Life below water, SDG 11: Sustainable Cities and Communities, and SDG 7: Affordable and clean energy.

“It is reassuring to note that it does not exclude the very important secondary SDG 13 which calls for Climate Action. Our efforts will not end with the signing, as we will now be charged with the implementation of the programme and its related activities. I am happy to say that two professional institutions will aid us in this.

“Expertise France will be the managing organisation for the programme and was selected based on a competitive proposal; the selection was endorsed by the Caribbean OCTs during their regional meeting in Bonaire, November 2017. Secondly, the indirect management by the World Bank as a leading financial institution is in accordance with EU articles applicable to the specific situation of the OCTs and is supported because of their experience in the region,” said Marlin.

“From tonight, St. Maarten looks forward to our continued regional cooperation and I am positively looking toward the first semester of 2023 when evaluation and audit services will be conducted.

World Bank Vice President for Latin America and the Caribbean Jorge Familiar addressed the gathering on Thursday. While on a three-day visit to the island, he met with government, parliamentarians, and local partners to discuss progress of the recovery and reconstruction after Hurricane Irma.

During his meetings with Prime Minister Leona Marlin-Romeo, ministers of her government and the General Affairs Committee of St. Maarten’s Parliament, Familiar reaffirmed the Bank’s commitment to help the island in accelerating its recovery efforts and strengthening resilience after the storm.

In the six months since the establishment of the St, Maarten Recovery, Reconstruction and Resilience Trust Fund financed by the Netherlands, of the US $134 million received so far $103 million has been approved for three projects. These three projects focus on disaster management, housing and shelter repairs; income support and training; and the building of a new resilient hospital. All projects are aligned with the St. Maarten government’s priorities established by the National Recovery and Resilience Plan.

Advance preparation is underway for four new projects, as well as the procurement in the coming weeks of heavy fire-fighting equipment for putting out fires in the Great Salt Pond disposal site.

Familiar visited the airport and the Great Salt Pond dumpsite during his trip. He met with the team from St. Maarten Medical Center (SMMC) to see first-hand the ongoing construction work and roof repairs at the hospital and recognised the good progress and strong collaboration between SMMC, the Ministry of Health and Social Services VSA, and the World Bank.

Familiar also met with some of the 870 students benefiting from the Emergency Income Support and Training project funded by the Trust Fund and implemented by VSA and St. Maarten Training Foundation. The project will provide training and a stipend for up to 1,800 people who are unemployed or underemployed following Hurricane Irma.

He told the summit attendees about the importance of taking a broad approach that balances environmental, fiscal and social resilience. He emphasised the need to place even greater priority on building back better while aiming for swift recovery and reconstruction processes.