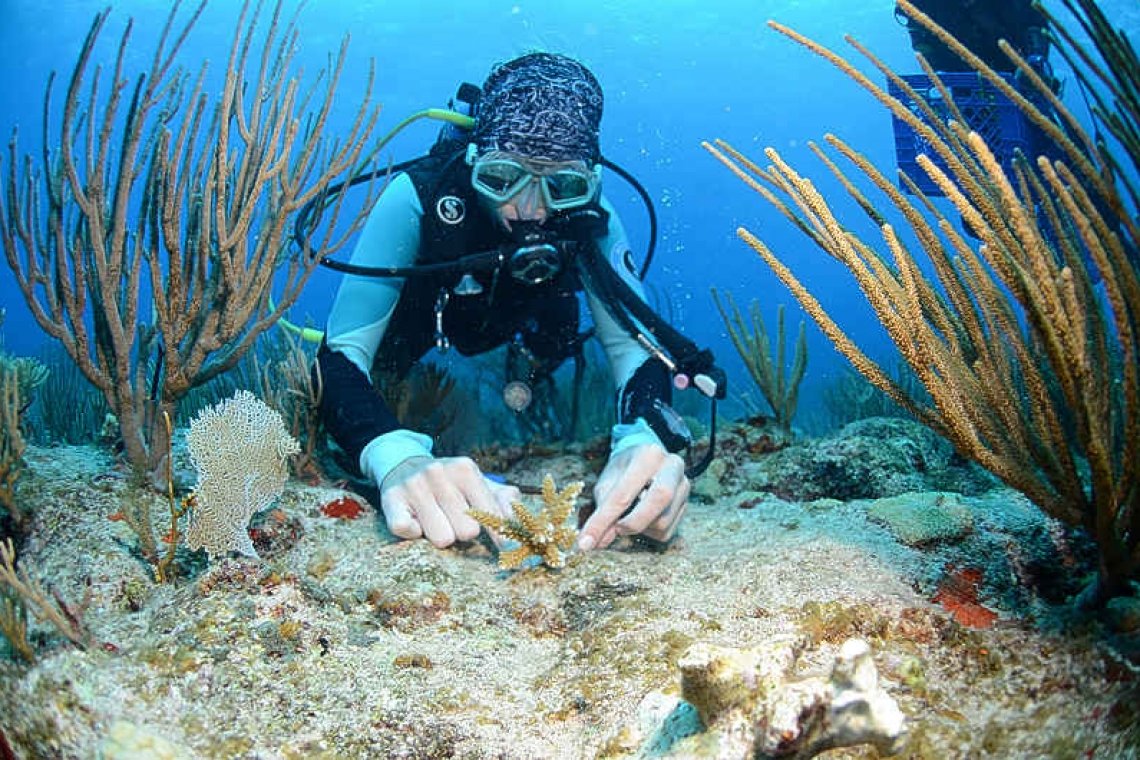 These coral fragments have been growing in the Nature Foundation’s coral nursery for several years. Some of these fragments were even Hurricane Irma survivors and are now able to flourish on the local coral reefs, says Nature Foundation.

As part of the restoration project, the Foundation established a coral nursery to increase the growth of coral fragments. Eventually, these are transplanted to coral restoration sites to improve the local reefs.

After Hurricane Irma, the coral species staghorn, Acropora cervicornis in particular, almost totally disappeared from St. Maarten reefs due to the massive storm surge and the indirect impacts of the hurricane.

One of the coral fragments, newly transplanted to a reef restoration site. (Leslie Hickerson photo).<img src=”/images/2020/08/27/page5c078.jpg” alt=”” />“Only two fragments were left in our coral nursery and 95 per cent of the mother colonies on the reefs were wiped out. Fortunately, we were able to save one viable staghorn fragment, which now has turned into 10 colonies outplanted on our reefs and several fragments still growing in the nursery,” explained Foundation Manager Melanie Meijer zu Schlochtern.

“The new staghorn fragments are doing well, but the growth is slow; although staghorn is one of the fastest growing corals, it still only grows about a centimetre per month. We hope to see a comeback of this important reef-building stony coral on our reefs.”

Besides staghorn corals, elkhorn (Acropora palmata) fragments were outplanted. These colonies are unfortunately showing less growth. Some did not survive and some lost significant tissue.

“We are concerned about the elkhorn fragments: although they are more abundant than the staghorn corals on our reefs, still about 80 per cent was damaged during Hurricane Irma and we only had 10 fragments left in our coral nursery after Hurricane Irma,” said Meijer zu Schlochtern.  “We are not sure why the outplanted elkhorn corals are hardly thriving, as their mother colonies are slowly showing signs of recovery, but deteriorated water quality could be the reason,” she added.

The Foundation outplanted a total of 64 Acropora fragments in the Man of War Shoal Marine Park over the course of 1.5 years, and hopes to find additional funding in order to continue its coral restoration project. This project aims to continue restoring some of the damage to the local coral reefs, caused not only by the hurricanes, but also by several issues the island has been facing over the last few decades in terms of unrestrained coastal development and improperly managed wastewater. Coral restoration activities. (Leslie Hickerson photo).<img src=”/images/2020/08/27/page5b078.jpg” alt=”” /> Acropora corals staghorn and elkhorn are not affected by the destructive stony coral tissue loss disease, which is currently affecting St. Maarten’s stony corals tremendously. However, their abundance has mostly been lost since the 1980s. In St. Maarten waters in particular, there are not many Acropora corals to be found.

They are currently listed as “critically endangered” on the International Union for Conservation of Nature (IUCN) Red List, and are a significant reef-building coral. Their loss has had considerable negative effects on biodiversity, fish biomass and coastal protection.

Nature Foundation is restoring elkhorn and staghorn coral reef zones by establishing a coral nursery to grow fragments and transplant corals at selected restoration sites. The goal is to raise these new coral colonies in nurseries to repopulate denuded coral reefs with fresh corals. Small colonies are specifically selected for characteristics such as robustness and fast growth to create resilient populations of new corals.

The project was made possible with the assistance of the Coral Restoration Foundation, the US National Oceanic and Atmospheric Administration (NOAA), the Coral Reef Restoration Consortium and the Foundation’s parent organisation, Dutch Caribbean Nature Alliance.