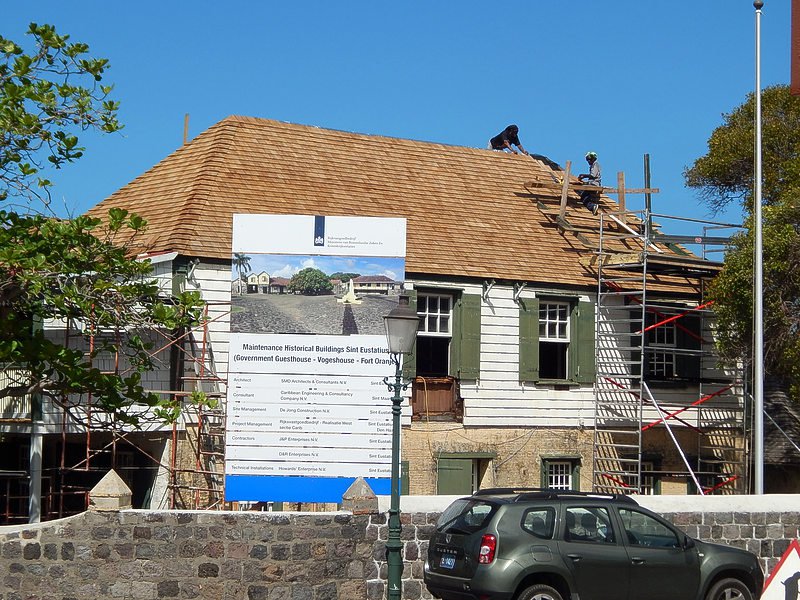 ST. EUSTATIUS–Restoration work is being done on the historical Government Guesthouse on St. Eustatius. The building has been in a bad shape for quite some time now and several minor accidents had occurred on the premises including an elderly man falling on the stairs. He avoided serious injury by hanging onto the railing. The project has a price tag of some US $250,000.

Due to the restoration, Island Council and Central Committee meetings are held in the Gertrude Judson Bicentennial Public Library.

After 10-10-10, several properties owned by Netherlands Antilles were handed over to the Netherlands. These included monuments such as Fort Oranje, Godet House, Voges House and the Government Guesthouse. The Dutch Government has allocated funds for the preservation of these locations.

The Guesthouse is the first project on the restoration list. SMD Architects and Consultants carried out the preparations. The construction contract was awarded to J & P Enterprises. De Jong Construction is supervising the works.

The restoration work consists of the replacement of the roof shingles, repair of doors and windows and replacement of rotten shutters. More repairs than anticipated are needed on the balconies and the first floor due to a large part being rotten.

Repairs will also be carried out on Bredeweg and the Voges House after completion of the main building in the guesthouse compound. The intention is to continue restoration of the other buildings on the premises and the buildings in Fort Oranje.