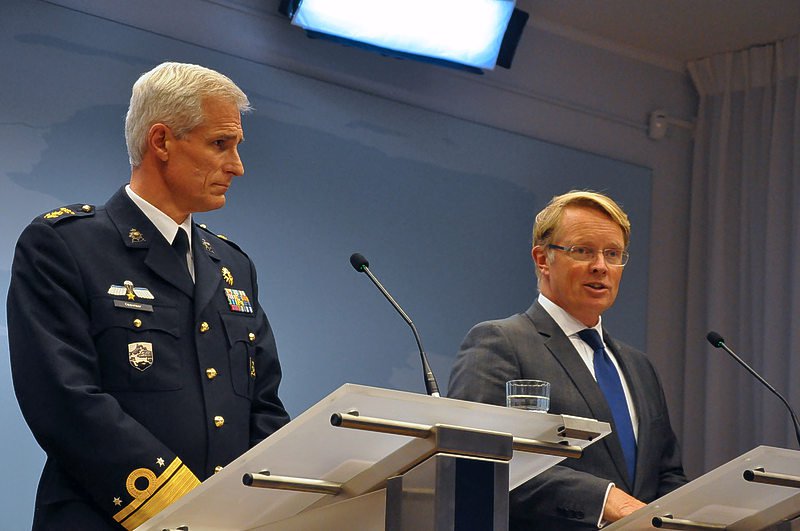 THE HAGUE–The distribution of water to the people of St. Maarten and repairing the water plant is one of the top priorities of Dutch Defence personnel working tirelessly on the island. Meanwhile a Dutch team has arrived to make an inventory of what is needed to rebuild St. Maarten.
General-Major Richard Oppelaar of Dutch Defence said at a press conference at the Ministry of Home Affairs and Kingdom Relations BZK that the Marines are working on restoring water. “Water trucks are going around where people can fill their jerry cans and buckets. Restoring the water plant is a priority.”
The distribution of water bottles that are flown in takes place in coordination with local authorities. There is sufficient fuel on the island for now, but the distribution is an issue with most gas stations down.
Restoring the public order, providing emergency assistance and the securing of critical infrastructure are the main three areas on which the militaries have been focusing on the past few days. “We are present, we carry out orders, patrol areas, support the local authorities like the St. Maarten Police Force in carrying out controls, man the control posts and we assist evacuees.”
Emergency repairs are being carried out at critical infrastructure such as the harbour, prison, airport and the water plant.
Safety has been improving over the past few days, but the situation remained fragile. “It is an emergency situation and we are working under a state of emergency. So emergency relief remains a priority,” said Oppelaar. With the replenishing of more troops, the total number of Dutch military personnel on Tuesday stood at 600, and more will be flown in over the next few days.
So far, 200,000 kilos emergency goods have arrived on the island, almost all brought in through Curaçao. Two C-130 Hercules aircraft of Defence and two Dash-8 aircraft of the Dutch Caribbean Coast Guard have been continuously flying between Curaçao and St. Maarten, bringing food, water and other emergency supplies to St. Maarten.
Evacuees are flown to Curaçao on the flights back. Up to Tuesday, some 750 persons were evacuated, and the evacuations will continue, said Oppelaar.
Responding to criticism that the emergency relief was going too slow, Oppelaar said that in critical times like these, relief aid could never be fast enough. “Everybody is doing their utmost. The distance is great, relief has to come in via Curaçao. But the distribution is improving.”
He said that the Dutch troops are highly dedicated to carry out their work to assist St. Maarten. “It takes a lot of our people, but they do so with vigour.”
Project Director-General Hans Leijtens of the BZK Ministry, who has been placed in charge since Saturday of the Windward Islands reconstruction project, said at Tuesday’s press conference that the reconstruction team had arrived on St. Maarten. The first task is to carry out assessments, together with local and international experts.
The team, which Leijtens said has been in cooperating well with local authorities, will work on the next phase after the emergency relief period. Involved are the United Nations (UN), the United Nation’s Children Fund UNICEF, the Red Cross, French authorities, as well as experts from Aruba and Curaçao.
Leijtens spoke of a “controlled and phased approach.” He said that for example, in cooperation with the Ministry of Infrastructure and Environment I&M, the harbour would be cleaned after Defence has carried out a thorough check. “We are doing things step-by-step. We are not yet working on the long-term, but we are keeping that in mind while providing assistance at this time.”
The reconstruction plan will involve a broad input of the Dutch Government and coordinated by the BZK Ministry. He emphasized that the project is being carried out in close cooperation with the St. Maarten Government, and that there is contact with Governor Eugene Holiday and Prime Minister William Marlin.
According to Leijtens, the team that has gone to St. Maarten will “stick” to the St. Maarten Government, working on an integral assessment and drafting long-term plans and serving as the connection between The Hague and Philipsburg. Asked if the different local culture of government would be taken into consideration, he said: “The similarities are greater than the differences, and we both want St. Maarten to recover, so I am confident that this will be successful. Together we will do good things.”
Leijtens said they were preparing for a long-term effort, but he couldn’t say exactly how long the recovery phase would take, as this depended on a number of factors. “It will be a matter of a long breath. The destruction is enormous.”
Dutch Prime Minister Mark Rutte told the media on Tuesday that for now the emphasis remained on providing emergency assistance and that the funding for the long-term recovery was not a priority for now. He said The Hague would not be stingy, but securing funds for the reconstruction was a matter for the future.
“We first have to assess what is needed. What will the insurance companies pay, what will the island residents contribute? What can others do, what can we do? The Netherlands is prepared to look at this very seriously,” Rutte said.
The Prime Minister said that the Netherlands is fully prepared to pay the emergency assistance. “That costs a lot of money. We are doing that, it is only natural. But we have to look at our contribution for the next phase.”
Rutte said the assessment will result in an integral plan, which will be looked at with the St. Maarten Government to determine who does what in the reconstruction phase. “But in this phase I cannot say anything about that,” he said, noting that St. Maarten was an autonomous country within the Kingdom with its own responsibilities. “It is not a colony.”