Home Local News Revellers turn out in numbers for Carnival 50 Jouvert Jump-Up | THE... 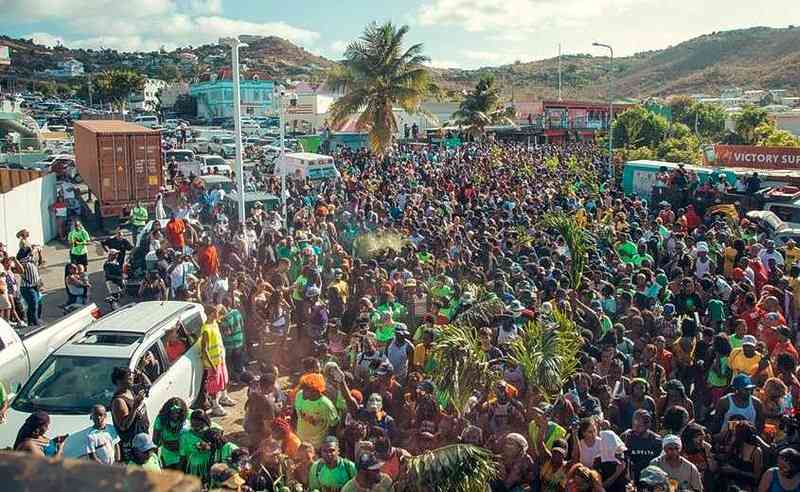 Kalaboom’s Splash truck continues to be the biggest crowd attraction for several years during the annual Jouvert Jump-Up. The Coors light-sponsored group provided shirts and gear for those who exclusively participated in the group.

PHILIPSBURG–Thousands made Jouvert Jump-Up one to remember on Saturday morning. Revellers lined up on Walter Nisbeth Road near the Philipsburg police station and followed fifteen music trailers playing local Carnival music for their fans.

St. Maarten Carnival Development Foundation (SCDF) President Alston Lourens thanked those who came out to Carnival 50 Jouvert Jump-Up, which could be considered one of the best Jouverts ever. He also thanked police and other security personnel for their dedication and service on Saturday.

Police reported on Sunday that the Jump-Up was attended by a very large crowd of revellers, onlookers and visitors to the island. During the event, police officers guiding the parade had to intervene in at least two incidents of ill-treatment where persons were injured. These persons were treated on the scene and then transported to St. Maarten Medical Center for further treatment.

Police also intervened in a minimal number of fights that occurred during the Jump-Up in those bands with the largest crowds. These fights were quickly brought to an end by police. Seven persons were arrested during the Jump-Up for minor violations. They were released after paying their fines. The most serious violation that occurred was public intoxication and resisting arrest, according to police.

The Police Traffic Department dealt with two minor fender-benders during this period. There were no traffic accidents with personal injuries or loss of life. No other irregularities related to the 2019 Jouvert Jump-Up were reported.

The police congratulate the community and the visitors to the island for their very good behaviour and for the great cooperation they have given to the police to guarantee the safety and security of everyone during this major event which has been one of the largest jump-ups ever. The police look forward to continued support and cooperation from the community through the rest of the Carnival season, which ends during this first week of May.