Home Local News Review of Carnival 2016, getting bigger and better 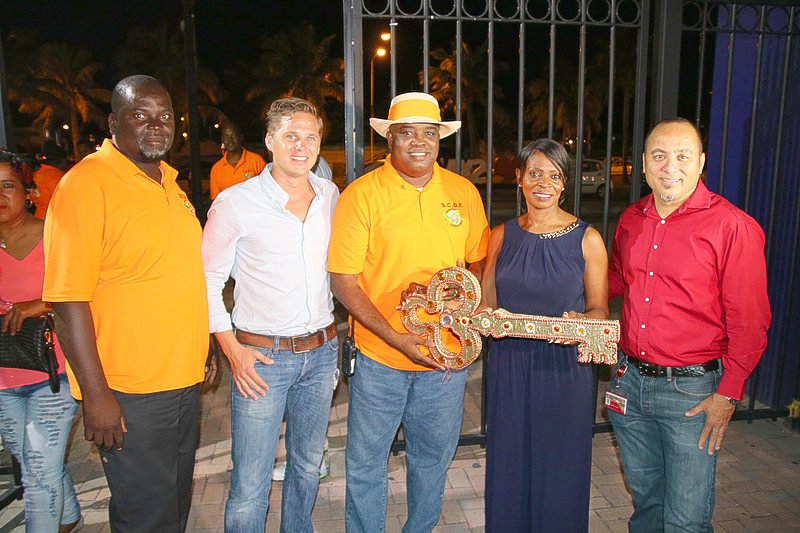 It is a good feeling that King Momo consists of nothing but sponge; however, it does signify the positive Spirit of Carnival. It reminds revellers that it is now over and the organisers, St. Maarten Carnival Development Foundation (SCDF), go back to the drawing board and begin preparations for the 2017 season.

TelCell should be commended for stepping up this year and sponsoring a majority of the shows in Carnival Village. It shows belief and support for the product to grow to even higher standards next year.

How does a group of volunteers sit in a room and come up with a well-balanced schedule every year? This can be answered only by these people who continue to make Carnival better; all hats should be tipped to SCDF.

The event that marked the beginning of the season took place on Sunday, April 10, with the SCDF band clash. This was the first of its kind in years and only three bands took part, which was unfortunate as there were close to 17 trucks for all the local bands for Jouvert Morning (but we will get to that).

The new XP Band won the competition and was named the Band Clash winner for 2016. This event has the potential to be much bigger. All that is needed is participation and guts from local bands, who often complain that nothing is done to promote their songs and art form.

The official opening of Carnival Village followed on April 14 with a jump-up and customary words of good wishes for the season by officials present. SCDF hired one of the local bands to perform for the event, which lasted about 30 minutes.

More should be done to mark the opening of the village. People do look forward to the festivities every year. The least that could be done is to offer some top-notch performances to fill up the entire evening. Mr. O-ezy and TG Band did rock the big audience at the opening event.

Soca Rumble, on April 15, continues to be one of the big local shows with international standards. The show lacks more support from residents, but the high calibre of performances orchestrated by performers seems to get bigger and better every year. Organiser Montage Events should be proud of the calibre of the show and should expect it to be one of the top shows during the season every year. This competition forces performers to produce music that is played over and over throughout the entire year.

The second edition of Caribbean Flag Fest took place on April 16 and a Caribbean flag fest it was. Thousands came with their flags, while some purchased their flags at the venue to see Caribbean bands perform for their fans.

Organiser 78inc should have more confidence in our local bands, as XP Band played its set at the beginning of the show and brought the house down with its excellent performance. The main acts also did a good job, but a shift here and there would raise the standard of the show; some advice for organisers to keep in mind next year.

The Queen Shows from April 17 to April 20 can be described as a bright future for pageantry on the island. SCDF outsourced the shows to Posh Productions.

The pre-events were a bit too much, as patrons filled the Belair Community Centre for two weeks. This gave patrons the opportunity to see the ladies of the pageants twice, but resulted in fewer people attending the Village night shows.

No doubt Posh will look at how it can improve the low attendance it received for the Junior, Teen and Senior Queen shows. Posh also should be commended for its stage design for the shows, which really showed that pageantry is serious business. Posh has two more years on its contract to organise the Queen Show events and work already has begun for next year’s events. Girls are encouraged to sign up and try out the experience.

Youth Extravaganza on April 21 was organised by Patrol to Eradicate Paedophilia (PEP). This show was a good attempt to inform youngsters about paedophiles and encourage them to sign up and become members of the organisation. However, the attendance level was very low – the lowest attendance of the youth night in years. PEP needed to do a bit more in promoting the event for its target audience. The positive message was distributed to the youngsters at the event.

Dream Team Entertainment’s Rick Ross concert was one of the first big international concerts on April 22. For the first time in St. Maarten’s history of Carnival, US $1,000 was given to concert-goers every hour on the hour. The concert itself was not what many expected. However, what else would you expect from some hip-hop artistes?

Social media was the platform used by many to convey that the show was a bit boring. Some said the artistes did not rock the crowd, while others argued that they were US artistes and “you could not expect wave your rag attitude” from them. The attendance level of the show was through the roof and the show remains one of the biggest shows of Carnival 2016.

Hits continued to be the order of the day as Telcell’s Night of the Hit Makers organised by Xtratight Entertainment holds the record of the biggest night in the Village for the second year in a row. The show was held on April 23, and the entertaining line-up allowed patrons to dance the night away from beginning to end. The custom-made dance floor was a perfect fit for fans to groove to the hits by the many superstars who took the stage. In our review of the show, we can only suggest another dance floor for the event.

“Pool, water, atmosphere” is the only way to describe the new concept of Bacchanal Sunday on April 24. Kallaboom organised the 80 per cent local, 20 per cent international acts show. This was the only show in years that saw a large turnout in Carnival Village before 9:00pm.

The Wet Fete did not have enough water for persons in the back of the crowd to enjoy; organisers will have to hire more water trucks to ensure the show’s continued success. Performers did not stay on long; they came, performed their hits and left the stage. A new concept instructed by the party crew, Bacchanal Sunday will grow to be one of the anticipated shows for Carnivals to come.

The NAGICO Senior Calypso Finals on April 25 should be seen as a wake-up call to many that the art of calypso is struggling to keep its head above water on the island. More interest should be generated for newcomers to sign up and go into the social commentary business. The performers did a great job and performed their hearts out, but more new blood was missing from the line-up. The show did make history with crowning the first-ever Queen of Calypso. It was about time.

April 26 saw the first-ever African Flavour concert. The show had a low attendance, but the day the show was scheduled could have been the reason: it was scheduled the day before the annual Jouvert Jump-Up. The performance list was well received by those who attended, but the venue should be looked at for the 2017 Carnival Season. Some patrons suggested that a concert of this magnitude be held outside of Carnival.

April 27 was the unofficial holiday of Jouvert Jump-Up. This time around SCDF decided to keep international bands out of the fete and focus all attention on our local bands. This recipe proved to work, as thousands enjoyed the annual event. It can only get better from here. SCDF hosted Band-O-Rama Village Night that same evening.

The One Love Reggae Concert on April 28, hosted by SCDF, drew a large crowd and showed why reggae is still a music genre to be reckoned with. Patrons flocked to the Village close to 10:00pm and enjoyed the tunes of the many international acts. SCDF will be hosting another big reggae concert for next year’s fete.

Sabor Latino on April 29 did it again with it high-calibre performances by international Latin acts. The young Latin community pleaded with the organisers to bring a younger artiste to the village for one of their shows, as the older artistes do not appeal to them. Concert-goers enjoyed the performance this year and look forward to the fifth anniversary of Sabor Latino next year.

The Junior Parade on Saturday, April 30, saw seven troupes take to the streets. The involvement of primary schools continues to be lacking in the parade and something has to be done to involve them to grow this product. Thanks to the long-time troupe leaders and newcomers the parade was able to stand on its own this year.

The Village Cook-out hosted on the same day continues to get better as booth-holders step up their game and show off their cooking skills. A bit more exposure should be given to this event for residents to come and witness the cooking and presentation by these hard-working cooks.

The Grand Parade on May 1 was a spectacular sight. Hundreds of costume-lovers filled the streets and paraded for residents and visitors to see. Dear troupe leaders: feathers and bikinis are a bit old-school; more creativity should be placed on your costumes as we would like the island to be unique instead of an imitation of other Caribbean countries; more efforts should be placed in creating authentic costumes. With that said, hats off to troupe leaders who work very hard every year to pull off a troupe; this task is not easy.

The Labour Day Parade on May 2 fused the Junior and Senior parades in one.

The Police Force of St. Maarten should be commended for its hard work during the busy season. Officers showed no sign of slowing down as they provided safety every night at the Village while working normal hours during the day.

Carnival 2016 is over and even though there were some unfortunate incidents, Carnival continues to be the island’s biggest cultural event. St. Maarten continues to improve its Carnival each and every year. The people are always the ones to give all the praise as they are the ones who attend these shows and spend their hard-earned money for them.

Source: Daily Herald
Review of Carnival 2016, getting bigger and better