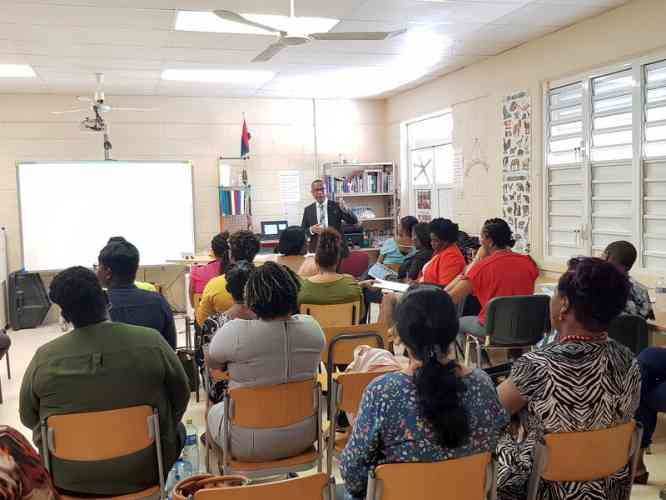 Minister Wycliffe Smith making his presentation to the staff of SMVTS on Wednesday.

SOUTH REWARD–A three-year implementation guideline with reworked curricula and new subject areas will be introduced in phases at St. Maarten Vocational Training School (SMVTS) as of this month.

Students will be offered properly structured courses of study for Labour Market Orientation Education (LMOE) or Preparatory Secondary Vocational Education (PSVE) which will lead to Project-Based Learning (PBL) certification. In the new programme, there will be an introductory transitional year for Special Education Needs (SEN) learners and English as Second Language (ESL) learners in the LMOE programme.

This was amongst information that was shared with teachers and staff of the school during a meeting on Wednesday.

SMVTS Director Rita Gumbs expounded on the plans for the new subjects and courses that will be offered to students.

Commending her team of teachers on their positive attitude towards the changes taking place at the institution, Gumbs detailed that in the improved programme, future students in years three and four will be offered concentrations in Automotive, NetPC Repair, Electrical Installation, Carpentry and General Construction.

New curricula will be introduced for Care, Cosmetology, Business Administration, Hospitality and Textile. Additionally, students will be afforded the opportunity to learn Dutch with Spanish or French, as well as Music and Art.

The meeting was intended to share “the collective vision” for the country’s public secondary school. The meeting was planned according to the strategic plan developed for the school in collaboration with the SMVTS Leadership Team for School Improvement Planning.

Minister of Education, Culture, Youth and Sports, Wycliffe Smith attended the meeting along with heads of the Divisions of Students Support Services; Examinations; Inspection; and Public Education; the acting Secretary-General and members of the minister’s cabinet.

Smith made a presentation to teachers and staff based on the plans put together from the input of stakeholders during the last academic year. As teachers and staff are critical to the execution of the ministry’s goals, Smith impressed on all present the importance of everyone’s commitment to the continuity of the programme for the restructuring of the school and the success of their students.

According to Smith, “All that is planned can only be achieved by working together.”

Recognising the critical role of leadership at all levels, he encouraged each teacher, member of staff, management of the school and divisions of the education sector to be mindful of their role in leading in their sphere.

Quoting John Maxwell, Smith said, “Everything rises and falls on leadership. This programme is in the hands of the school’s management and staff and the ministry, not the minister. For the programme to be successful, regardless of who sits as Minister of Education, it is for you to continue the implementation and see the change become reality. Change is not easy, but we must each be the change we want to see.”

The next step for implementation will be the inclusion of parents and students in the plans for the school. When all key stakeholders have been informed of the process, further details will be shared with the public, it was stated in a press release Thursday night.

Examinations Division head Yvette Halley elaborated on the plans for programme completion and curricula that will see students qualifying for recognised certificates on successfully ending their years of study at the school.

Smith also recognised the contribution of Anita Facey, who had presented the staff’s concerns in the first staff meeting with the minister earlier in 2019.