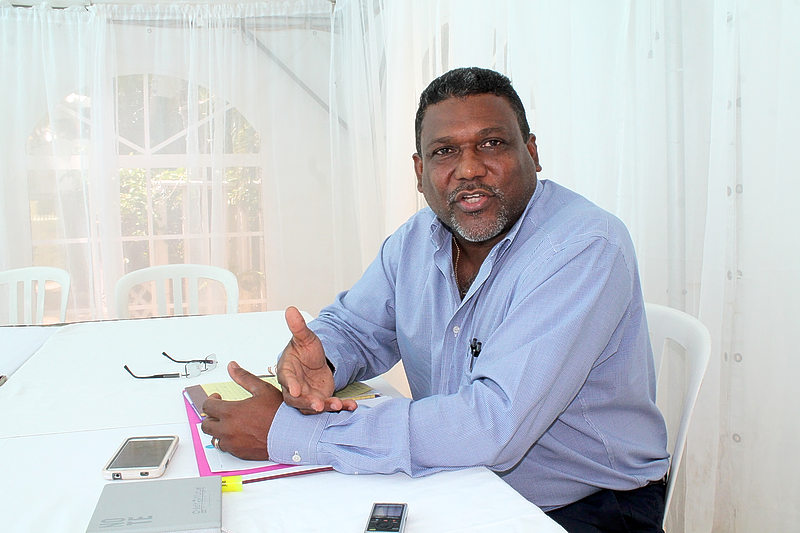 MARIGOT–Former President of the Collectivité Alain Richardson has defended his call for the Territorial Council and Parliamentarians to resign in the wake of the Constitutional Court decision denying the Collectivité its right to a fair compensation package for the transfer of competences in 2007.

“In February 2007, the law-makers took a major decision, as a result of the political will expressed democratically by our population in 2003, with the adoption of the new status of our territory and the creation of the Collectivité of St. Martin governed by Article 74 of the Constitution,” Richardson reminded in his release.

The regulation stipulates: Article LO 6311-1 – “There is hereby established an Overseas Community, on the French side of the island of Saint Martin and neighbouring islets thereto attached, that overrides the commune of Saint Martin, the Département of Guadeloupe and the Région of Guadeloupe.

“This Overseas Community, governed by article 74 of the Constitution, takes on the name of: ‘Community of Saint Martin.’ It enjoys an autonomous status.

“The Community of Saint Martin is freely governed by its elected representatives and by means of the local referendum, according to the regulations stipulated by this code of law.

“The Republic guarantees the autonomy of Saint Martin, the respect of its own interests, taking into account its geographical, historical and cultural specificities…”

“Yet the Constitutional Council has by its ruling of July 1, 2016, in response to the Constitutional Priority Question (CPQ) presented by St. Martin, stated shamelessly that the financial interests of the State of France are more important and take precedence over the rights and constitutional principles of communities and in particular that of St. Martin,” Richardson stated.

“In a nutshell, this decision clearly affirms that the financial interests of the State take precedence over those of the Nation – the Nation being the people, the local and territorial district that make up the Republic, and consequently over the interests of St. Martin.

“Article LO 6371-5. – The expenses mentioned in article LO-6371-4 are offset by the transfer of taxes, the overall operation allowance established by article L. 6364-3, the overall allocation for the construction and equipment of schools established by article l. 6364-5 and for the balance, by the award of a total compensation allowance included in the State budget. The finance law, each year, states the amount of the grant. In the first year, it evolves as the overall operating allowance under the conditions laid down in article L. 1613-1…

“It is, therefore, very clear that the intent of the operational regulations (Organic Law) was to ensure the financial neutrality of the change of status and the creation of the new Collectivité, in laying down as a founding principle compensation for expenses resulting from transfers of competence made between the State, the Region and Department of Guadeloupe, the Commune of St. Martin and the new Overseas Community of St. Martin. As a further reminder, the operational Law and all its provisions has been validated in 2007 and reported as compliant with the Constitution.

“How then should the ruling of the Constitutional Court dated July 1, 2016, be explained and understood when it states that despite the annual loss by the Overseas Community of more than 20 per cent of local revenues of the Commune, the principle of financial neutrality has indeed been respected and that there is an effective compensation for transferred expenses?

“How should one interpret the fact that the only question raised by the members of the Constitutional Council on the hearing of June 21st was: ‘And all amounts to how much?’ Could this be an indication of the basis for the decision?

“Robbing the Collectivité of St. Martin of more than 100 million euros is criminal when one knows the extent of the social and economic issues plaguing the community: large number of young people, high rate of population growth, highest school failure and unemployment rates, gross domestic product per inhabitant remained unchanged since 1999. Record amount of social intervention in the budget, this all represents an explosive mixture. This is the conclusion. This is the reality. To deprive St. Martin of some 100 million euros, in such a dire situation, is taking the responsibility for lighting the touch paper to a time bomb.

“This is not the time for statements of helplessness and disappointment. I invite you to take the only action that measures up with the severity and serious consequences that such denial of rights has on our territory that is for a collective and concerted resignation of all elected officials of St. Martin from their mandate.

“This action, no matter how extreme it might appear, remains the only one able to assert ‘the specific interests of St. Martin within the Republic.’ You will come out stronger because of such political action and personal sacrifice.

“But above all, the shock waves generated by such action will compel the French State to reconsider its refusal to compensate the transfers of operating expenses and the urgent need for the implementation of a plan for overcoming the structural delays of our territory. The most appropriate response lies in your hands. Do it for the love of St. Martin.”