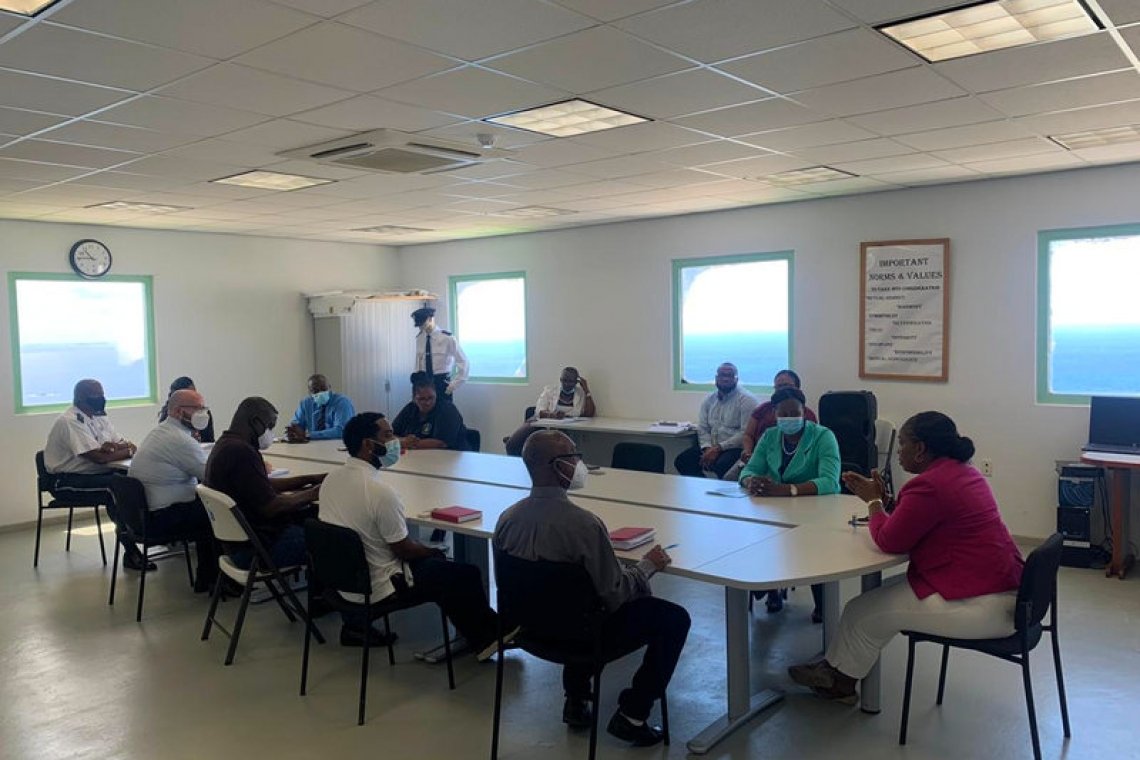 Justice Minister Anna Richardson (right, at head of table) speaking with personnel of the Pointe Blanche prison during an emergency meeting on Wednesday.

PHILIPSBURG–Justice Minister Anna Richardson said on Thursday that she is disappointed that inmates of the Pointe Blanche prison and their legal representatives are maintaining a general strike at the detention facility.

The inmates began their strike on Monday, May 25, and have demanded better living conditions at the house of detention. As part of the strike, inmates have refused to do any labour within the prison, such as washing, cleaning and cooking activities. These tasks must now be done exclusively by prison personnel.

The inmates’ strike started on the same day in which an inmate was severely injured by other inmates wielding an improvised weapon. He was later transferred to St. Maarten Medical Center (SMMC) for treatment. This was at least the second altercation this month that led to an inmate being injured.

Richardson abruptly left Wednesday’s live virtual Council of Ministers press briefing to attend an emergency meeting with the prison’s management. According to her, the meeting was about the “recent incidents that took place at the prison.”

She said the narrative “being pushed in the media” about the prison and these recent incidents is unbalanced.

“The current state of the detention facilities in St. Maarten has been a source of concern, both locally and internationally, for a number of years – especially following the damage caused by the 2017 hurricane season. It is no secret that a structured solution to bring the facilities up to par is needed.

“However, it is unfair to paint a picture that the Ministry of Justice, and by extension the government, is not actively working to improve the conditions, not only for inmates but for employees as well,” said Richardson.

Richardson said the injunction filed by 37 inmates against the St. Maarten government has no merit.

In the injunction, the inmates are calling on the court to have them transferred to safe detention facilities in the Netherlands or in Bonaire within seven days after a verdict. Lawyers Sjamira Roseburg, Geert Hatzmann and Shaira Bommel, will be calling on the judge to attach daily penalties of US $1,000 per inmate with a maximum of $10 million in case the government and minister of justice fail to comply with the verdict.

After being postponed in March due to the coronavirus pandemic, the hearings in this injunction have been scheduled for June 5.

Regarding the daily penalty of $1,000, Richardson said it is “quite an outrageous demand.”

“In the meetings that took place, the inmates brought a number of their concerns to the attention of the minister, such as prison capacity, COVID-19 and inmates who are allegedly missing information about their sentencing,” said the Ministry of Justice in a press release on Thursday.

According to the ministry, Richardson has already taken action to alleviate some of the inmates’ concerns, such as identifying several inmates who were eligible for early release and/or monitoring via ankle bracelets.

“Whilst efforts are in process to reduce the number of inmates being housed in the prison facilities, the reality is also that there were persons who committed crimes [in the meantime] and [who] had to be incarcerated, which added to the prison population. Law enforcement officials must continue to execute their jobs in maintaining law and order in the country,” said the ministry.

Richardson said a prison’s “environment” is largely influenced by “inmates and their behaviour.”

“Even with a state-of-the-art prison, it is imperative that the inmate population contributes to building an environment that is cordial and peaceful. All actions counter to this objective, severely diminish government’s efforts, and by extension those of the prison’s management, to maintain a safe and adequately secured facility,” she said.

According to Richardson, inmates of the Pointe Blanche prison can engage in rehabilitative activities.

“There is literature available in the library and GED [general education diploma] classes are given. Inmates can also make use of a gym facility, which helps to promote a healthy lifestyle. This is all financed by government but is only truly effective when inmates make appropriate use of these opportunities and facilities,” she said.

Inmates also have access to “adequate” medical care, she said.

“At the onset of the COVID-19 pandemic, the ministry took necessary precautions to ensure the safety of inmates and personnel. For the inmates, this included providing them with anti-bacterial soap, facilitating trainings on how to best guard against COVID-19, and setting up online access so communication with family members and legal representatives would not be interrupted,” said Richardson.

Richardson also said the Justice Ministry and the Ministry of Public Housing, Spatial Planning, Environment and Infrastructure VROMI have had meetings and conducted site visits to develop plans to construct the new prison. Funds for the new detention facility have been earmarked in the country’s 2020 budget.

“In connection with the plan, the minister of justice has presented a proposal to the Council of Ministers for its approval, which will subsequently be presented to the Parliament of St. Maarten to secure necessary support.

“After having received this support, the minister will engage with all relevant stakeholders to ensure their input and contributions, and phase one of the action plan will be put into motion,” said the Justice Ministry.

July 3, 2020
0
Richard Panneflek. PHILIPSBURG--The Minister of Public Health, Social Development and Labour VSA Richard Panneflek has announced that as of Wednesday, July 1 the total number of COVID-19 cases on St. Maarten is now 78.    According to a press release on...
Read more
Local News