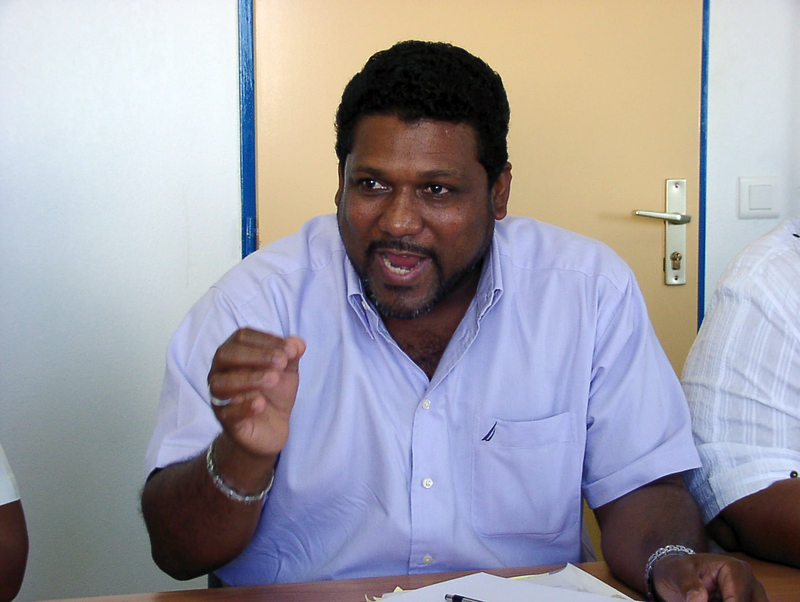 MARIGOT–Former President of the Collectivité Alain Richardson, now at the helm of “For the Love of St. Martin” party, proposes reducing the land tax by 25 per cent by “disconnecting” the garbage tax element (it can be reconsidered elsewhere), reforming and reassessing fiscal values of property that form the basis for calculating land tax, as well as introducing a ten-year grace period for resolving all pending succession files (exempt of succession tax).

These were just some of the measures proposed at Friday’s town hall meeting on land ownership organised to find relief from the heavy constraints, taxes, and social burdens suffered by St. Martiners on property and rental incomes.

“The basis of calculation of the garbage tax is ‘fiscal rental value’ of the property,” Richardson explained. “The amount of garbage produced depends on the value and size of the house, but close to 25 per cent of it is represented in the land tax.”

On rental income one has to pay income tax, social contributions (15.5 per cent) and lease tax (three per cent of gross rental income).

Constraints that place a burden on a landowner, he added, include an unfair zoning policy whereby the only land a family owns is zoned non-constructible, a very low building ratio, and land that is reserved for Conservatoire du Littoral or Office Nationale des Forêts (ONF) that want to purchase it, even against the owner’s will.

Other constraints include unsettled succession from years gone by that reach a high succession tax cost, family feuds that prevent development, regulations that concern housing projects, and no exceptions for family housing projects in the setting of family land-sharing.

He said it was necessary to free property and rental income, and tax pressure, to make the “St. Martin Ideal” accessible again, coherent with the history of the territory, to trigger economic and social growth by releasing and making more land available, and for fiscal justice.

A new urban planning framework, simple and adapted specifically for St. Martin, is proposed for a more conducive fiscal policy. It involves scrapping the Urban Development Code for the entire Plan Local Urbanisme (PLU) regulation and introducing a new territorial framework that meets the “reality” of St. Martin and “specific interests.” New zoning categories would be created (for hotel development, re-acquiring zones, etc.).

The idea is to introduce a new setting to facilitate and encourage territorial housing projects (but mostly family projects), destined to encourage development and sharing of family land, and to create a territorial-specific agency to assume the roles and missions of the State-owned Conservatoire du Littoral and ONF.

Other solutions include making permanent incentive measures to encourage donations while still alive if there is commitment to develop the property, refine and simplify the income tax system by suppressing various categories, and introduce incentive measures (exempt from profit and capital gains) when developing housing projects for the middle class.

As far as assistance for the population is concerned, an agency can be formed to inform and advise on all public measures and aids existing at State, social agencies, and Collectivité levels, guided towards facilitating ownership, renovation, returning properties to standard and resolving inhumane living conditions.

All pending non-conflicting files pertaining to domain land must be addressed and solved urgently, as well as the huge issue of filling in ponds and the sea.

Richardson said there is potential for thousands of unfinished houses and projects to be completed and put back on the rental market.

This would be facilitated by creating a fund managed by a public agency whereby an agreement is signed with owners holding a deed. The agency finances the completion of the house and manages it (renting it) until the agency has recouped its investment.

Financial sources can be obtained from subventions from the Collectivité, mobilisation of all State measures, partnerships with social agencies, and through funds collected by the Collectivité from the sale of domain land.

The benefits will include stimulation of the construction sector for small contractors, jobs provided for the youth and persons collecting Revenu Solidarité Active (RSA), the people will be empowered knowing that the “St. Martin Ideal” is real again, the housing deficit will be resolved, living conditions will be returned to acceptable standards and people will see an increase in their revenue.

Historian Daniella Jeffry gave an overview of the bond that St. Martiners always had with the land since slavery days which led to the “St. Martin Ideal,” which was lived by all the generations that preceded the current one.