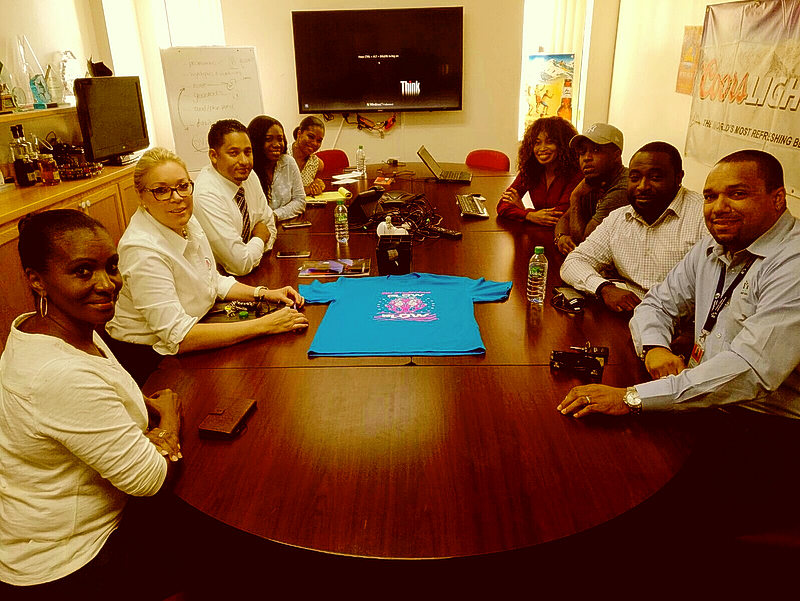 Rio Productions and NBA during a recent meeting.

PHILIPSBURG–Popular Carnival festivities organiser “Nothin’ But Alcohol” (NBA) will be joining forces with Rio Productions this year and plans to form an integral part of the Lighted Parade, lighting up the night-time sky of Philipsburg on Saturday, April 1.

NBA has come on board with Rio to further enhance the participant experience and to grow the parade exponentially compared to previous years. The popular group, which has become known for its fun-time J’ouvert Morning troupe, has grown to well over 1,000 participants over the years.

The musical entertainment for the road will be a combination of bands and some of the island’s most popular DJs. Back by popular demand will be Small Axe Band and joining it on the road will be Grand Masters Band, both of which are bands from St. Kitts.

The 2016 parade was a great success, due in part to the addition of Soggy Dollar Bar.  This year Kurt Lukkert, known in the industry as DJ Bossman, will not disappoint as he will be adding new features and stepping up the look of his lighted “Rolls Royce.” Ever popular DJ Outkast will be rocking his road jams on the upper deck of the bandwagon for the night.

Rio Productions President Brenda Wathey is very excited about the new partner in the Rio Lighted Parade. “It has always been my intention to open the participation of the lighted parade to other groups and having NBA come on board is the first step in growing the parade even further,” she said.

T-shirts for the parade will go on sale at the Chippie booth during the Heineken Regatta. As usual, Chippie will offer a package deal that will include a free top-up. For those participants who purchase early, T-shirts will be available for US $40 for the first week of sales and $45 thereafter. Purchase will include one T-shirt, one set of LED string lights, open bar and access to any music truck in the parade.

For more information concerning the start of T-shirt sales, participants are encouraged to follow Rio Productions on Facebook or visit its web page