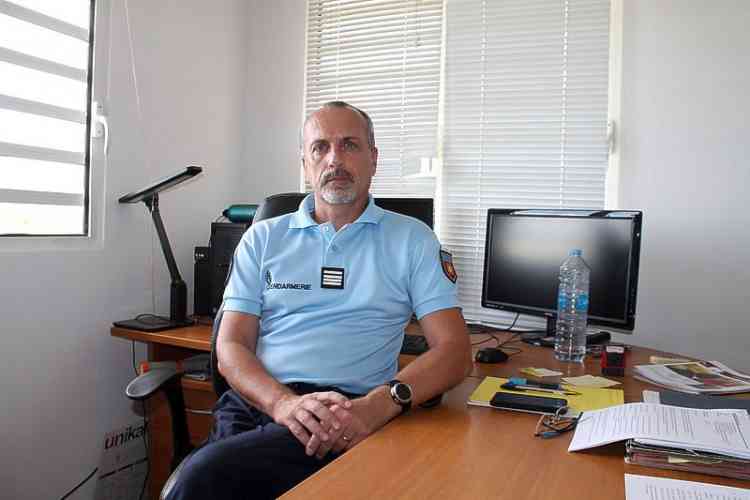 MARIGOT–Maintaining law and order, bringing criminals to justice, and assuring safety of the population is the raison d’être of law enforcement in all countries. French St. Martin is no exception, where the cycle continues on a daily basis for the Gendarmerie.

The population is familiar with the rotations at the head of the Gendarmerie every three to four years. Commandant Stephan Basso is the latest chief to take the reins of the Gendarmerie in St. Martin and St. Barths, succeeding Sébastien Manzoni.

Basso hails from the city of Orange, near Avignon, France. Married with three grownup children who are working in France, he brings considerable experience to the role, having worked in similar positions in France and French Guiana.

His previous posting in France put him in charge of a battalion with an additional five stations under his command. His posting to St. Martin comes with a similar setup.

“Before my last job I was in French Guiana, which was an important post for me, and prior to that I was in Haiti on a United Nations (UN) mission just after the earthquake in 2010,” Basso reveals. “We were stationed in Port-au-Prince. I was in charge of 35 Gendarmes and we stayed there seven months.

“It was a very difficult mission, as you can imagine, with the country in total collapse and despair, and very difficult conditions to work in with no water and electricity. But when I look back, that was an interesting mission and easily the most challenging of my career so far.”

When the opportunity arose, he said his first choice was to come to St. Martin because of the unique challenges this island presents.

“It’s challenging in the sense that you are dealing on a diplomatic level with the Collectivité, the Préfecture, the Justice system, the French State and Dutch St. Maarten, a separate Dutch- and English-speaking territory where procedures are different.

“You need to have a good understanding of how it all works on both sides of the island. The Gendarmerie is in the middle of this multi-faceted relationship. For me, I hope my assignment will last four years to achieve everything I want to do.”

Although he has not worked on a small Caribbean island before, he agrees on the importance of adapting to local culture, striking a balance between maintaining order, applying the law and remaining sensitive to local traditions and customs by acting with restraint.

“Gendarmes are not always loved in France, and I’m sure it is the same here. It’s nothing new, we are used to it,” he said ruefully.

He said he hopes the spirit of good cooperation enjoyed by his predecessors with his counterparts on the Dutch side will continue. “It’s essential to reinforce cooperation between the two sides. You cannot fight crime without it,” he stressed.

Basso has some 200 Gendarmes under his command: 124 are permanent and about 80 are specialised in riot control or other missions and they rotate every three months.

He is in charge of the stations in Marigot, Hope Estate and St. Barths, plus other departments or units; for example, Brigade de Recherches (detectives), Juvenile Delinquency Brigade, Logistics, Brigade Nautique, motorcycle units, and so on. To be in charge of these units which he did not have in his last post in France, was another reason he chose St. Martin.

Unsurprisingly, reducing delinquency on the roads and preventing more deaths is at the top of his priority list, along with cracking the ongoing phenomenon of vehicle theft. Préfète Déléguée Sylvie Feucher had also stressed her insistence on addressing security on the roads.

“It’s crazy, these young people not wearing crash helmets, going full speed with no regard for other users on the road. But I’m here to try and solve this problem. There will be more controls, yes, but we are taking a different approach to it with new methods. It will be combined with more campaigns and awareness programmes in the schools.

“I think this is a problem everywhere. But on a small island like this the problem is exacerbated by the poor condition of the roads, hazards and many cars. When you consider the ratio of fatalities to the population number, eight deaths (five from two-wheelers) is quite a graphic statistic.”

With 300 vehicle thefts recorded since the beginning of the year, Basso is counting on the cooperation of the Dutch-side police in tackling this issue. He said cars are mainly stolen on the French side and end up on the Dutch side, before those same cars end up going into circulation again on the French side.

There have been 18 armed robberies since the beginning of the year. He said the main priority is to find and confiscate the weapons, which is not easy.

As far as projects are concerned, a new Gendarmerie station (Esperance) opened in Hope Estate. This is a temporary arrangement until the project in Green Valley, opposite Grand Case Airport, gets off the ground. But he said the project, a complete barracks for Gendarmes, is still some years away. There are currently no plans for any changes at the headquarters in La Savane.

With Hurricane Irma’s second anniversary just passed, the Commandant is also focusing on the Gendarmerie’s preparedness plan in case of another hurricane strike. It involves reviewing and updating protocols, reviewing resources, making changes and learning lessons from Irma. Like everyone else, he is keeping fingers crossed.