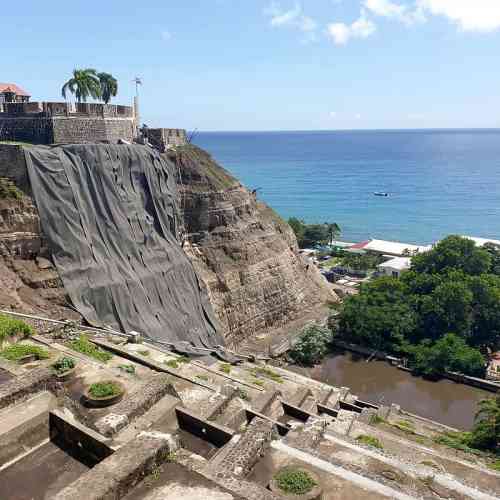 Roads in the immediate vicinity of Fort Oranje, St. Eustatius, and the surrounding cliffs will be closed on Saturday, August 31, and again on Monday, September 2. In photo: A wide-angle view of the cliff protection project at Fort Oranje and Claes Ghut.

ST. EUSTATIUS–Roads in the immediate vicinity of Fort Oranje and the surrounding cliffs will be closed on Saturday, August 31, and again on Monday, September 2. The Public Entity St. Eustatius made it known to motorists and pedestrians that the area will be closed off on both days from 7:30am until 1:00pm. This is being done in connection with the placement of nets on the cliffs with the use of helicopters.

Roads and areas that will be closed off are the Slave Path, Horseshoe Square by the Roman Catholic Church, Zr. Amantis Steeg and Fort Oranjestraat.

Traffic wardens will be regulating traffic on Orange Bay Road in Lower Town. Motorists are asked not to travel there between 7:30am and 1:00pm.

The Directorate of Economy and Infrastructure stated it regrets any inconvenience this may cause and thanked everyone for their understanding and cooperation.

In January 2019, a contract was signed between Acrobat X Caraibes and the public entity Statia concerning the re-stabilisation of the cliff surrounding historical Fort Oranje. The work is being carried out to ensure that Fort Oranje, which is immersed in history, is conserved from erosion that has been devastating the cliffs along the bay.

Anchors in the cliff wall are being installed in combination with steel netting and textile so that even the smallest particles will be held in place. Access to Fort Orange and the bottom of the cliff has been cordoned off for safety reasons and to allow the contractors free movement to the site.

The material being installed will allow the growth of flora and greenery along the cliff. A concrete curb with a fence will be installed to limit the access roaming animals have at the cliff’s bottom. It is estimated the project will be completed before the end of March 2020.