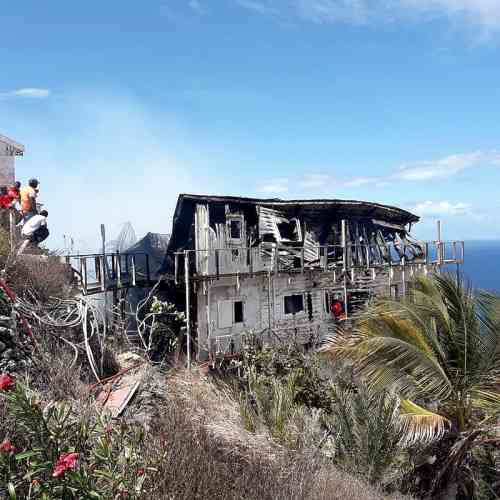 A roaring blaze on Zion’s Hill consumed at least two buildings and one vehicle Tuesday morning. In photo: The remnants of one of the burned-out properties. (Facebook photo/Charles Hassell)

SABA–A section of Zion’s Hill was on fire Tuesday morning. The roaring blaze has consumed at least two buildings and one vehicle. Firefighters were stretched to their limit as they were battling heavy winds to bring the growing fire under control.

All the island’s water trucks were on the scene to provide the firefighters with sufficient water to battle the flames. An ambulance was dispatched as a precautionary measure to the area of the fire that is commonly called Lower Hell’s Gate.

Extra manpower to assist with the fire was being flown in from St. Eustatius, the Public Entity Saba announced early afternoon via Facebook.

Residents in Zion’s Hill were asked to keep the windows and doors to their homes closed and remain indoors to avoid being affected by the smoke. Juancho E. Yrausquin Airport and Airport Road were closed off for traffic.

At around 2:15pm the Fire Department had the situation under control and the Airport and Airport Road were reopened. However, road users were asked to exercise caution while driving on the scetion in the vicinity of the incident.

The Public Entity Saba has made provisions to offer both material assistance and shelter to the victims who have been affected by the fire, Patricia and Michael Chammaa, the former owners of Brigadoon restaurant in Windwardside.

The entire community of Saba was torn following the devastating fire that quickly engulfed the Chammaa home, leaving them homeless and with nothing. Zulema R. Every immediately started an Internet fundraiser for the Chammaas on Facebook named “Rising from the Ashes.”

Fire Chief of St. Eustatius Andre Bennett said his department had received a formal request from Saba for assistance for more manpower and equipment to help combat the fire. In response to the request five firefighters were taken by helicopter to Saba’s airport, which was in the vicinity of the fire.

Bennett said early Tuesday evening that the fire was under control but Statia’s fire personnel would stay in Saba overnight in case they were needed. The firefighters are expected to return to Statia today, Wednesday.

The fire departments of Statia and Saba are both sections of the Caribbean Netherlands Fire Department and are engaged in an exchange programme for training. Last month Saba fire personnel travelled to Statia to train.

The Saba Fire Department and the Police did not issue a statement about the fire to the media and did not provide any information about the cause of the blaze.