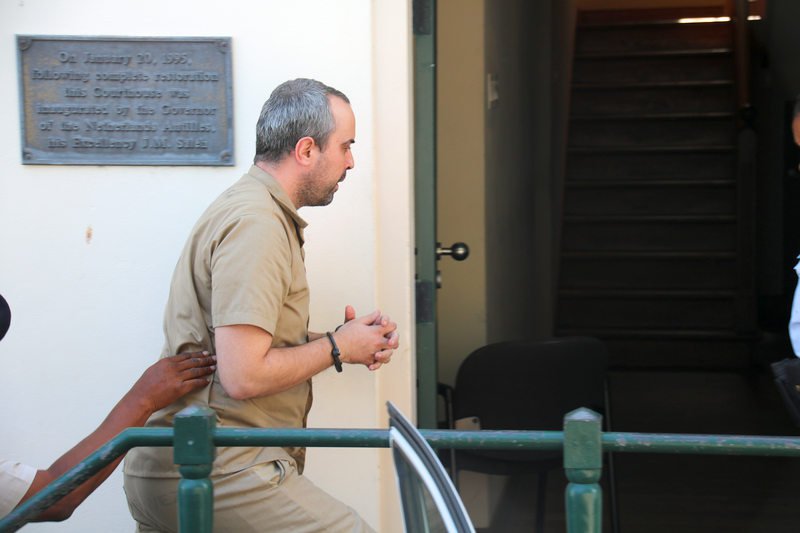 PHILIPSBURG–The man who walked into Scotiabank on February 5, and handed a note to a teller stating that a bomb was in the building and demanding that the teller hand over money stood trial on Wednesday.

Polish national Gracian J. Furgala (34) confessed that he had used this method, which he had researched on the Internet via search-engine Google.

The bomb threat persuaded the teller to hand him US $8,730 and NAf. 9,220 in cash, after which he managed to leave the bank unnoticed.

According to attorney-at-law Geert Hatzmann, Furgala ended up in St. Maarten after a love affair had gone wrong in the Dominican Republic. The former warehouse manager had sought a better life in St. Maarten. However, he failed to get a job here and ended up in financial difficulties. He was desperate to return to his mother in Poland and sought a rather unorthodox way to obtain money to buy a ticket, his lawyer said.

As he knew he would be pursued by the authorities, he sought the assistance of human smugglers. They took all his money and sailed him to Tortola, where he was arrested.

The Court hearing was postponed several times to obtain a psychiatric assessment. As it proved impossible to obtain a report on short notice and to avoid more delays it was decided to continue the case without a professional opinion about the suspect’s state of mind.

The Judge, the Prosecutor’s Office and Furgala’s lawyer agreed that there were sufficient indications of the suspect’s lesser accountability. Parties only differed in opinion as to the extent to which the accused should be held accountable.

Furgala informed the Court that he suffered of schizophrenia and medication was found in his luggage.

Prosecutor Nanouk Lemmers said this case did not involve a typical bank robbery with a standard bank robber. However, the case was still serious as the defendant had scared the teller in to giving up considerable amounts of money.

Holding the suspect “slightly non-accountable,” the Prosecutor called for a 180-day prison sentence, 145 days of which were already spent in pre-trial detention.

The remaining 35 days are to allow defence lawyer Geert Hatzmann, along with the Minister of Justice, to arrange for his client’s expulsion and flight back to Poland, it was stated.

The Prosecutor’s Office also filed a dispossession claim on the criminal proceeds. As his client had lost all the money to the human smugglers, Hatzmann called upon the Court to put the tab at zero.

The Judge found the defendant less accountable. “He does not belong in jail and should return to Poland as soon as possible,” the Judge said. In sentencing, the Court followed the Prosecutor’s demand and also awarded the dispossession claim for the full amounts.