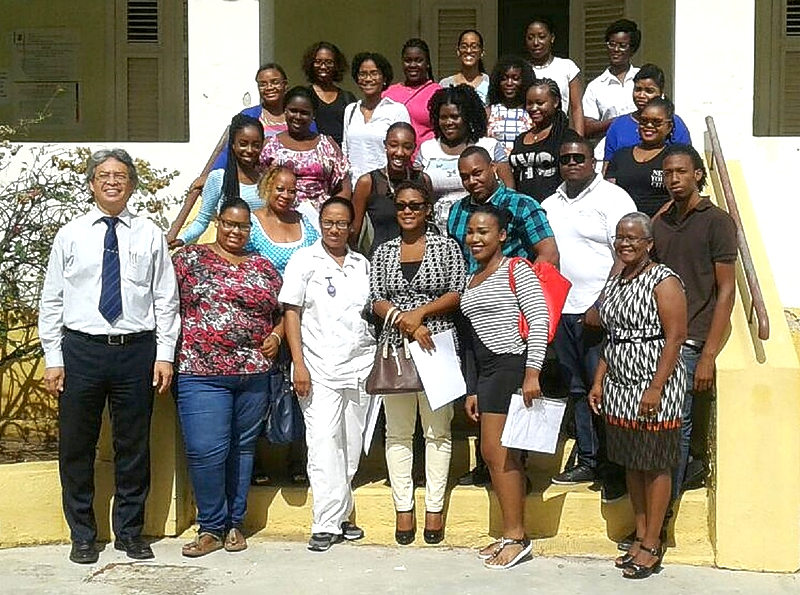 MARIGOT–The Robert Weinum Cité Scolaire was officially inaugurated Monday in La Savane with a ribbon cutting in the presence of the late Robert Weinum’s family members.

The 20-million-euro educational facility that comprises Lycée and College was opened in January 2016 as a solution to relieve the overcrowding at the aging Lycée in Concordia. The first stone was laid in December 2013.

Former Director of General Services (DGS) Pascal Averne who was involved with the project at its inception was also present.

President of the Collectivité Aline Hanson noted in her address that the school population in the second degree has quadrupled in 26 years.

Semsamar was commissioned to construct the Cité Scolaire which subsequently provided work for several local companies.

Cité Scolaire caters to 400 College students and 554 high school students. It has 23 classrooms, three language laboratories, eight science and technology labs, two computer rooms, and three art rooms, not forgetting a cafeteria and a sports complex.
The cafeteria serves healthy, balanced and nutritious meals and Hanson urged parents to register their children to make use of it.

“Our mission is to give students the means to achieve academic success,” she continued. “I would like to pay tribute to the educational community for its selflessness in putting the success of students first. I would also like to thank the landowners for cooperating with the development and construction of parking and sidewalks.

“This facility marks a significant step forward for our youth. We can all be proud of this accomplishment.”

Hanson expressed her gratitude to the family of Robert Weinum for allowing the use of his name while also remembering his great contribution to the community in many fields.
Family members present included daughter Rolinda Weinum, son Roger Weinum, grandson Noauni Weinum, and grand-daughter Aaliyah Weinum.

Principal of Cité Scolaire Frantz Gumbs took a moment to present the entire staff and teachers of the establishment to the audience.

The Grain D’Or dancers performed in front of the assembled dignitaries before the plaques for both Lycée and Collège were unveiled. The ribbon cutting honour went to Robert Weinum’s grand-daughter, Aaliyah Weinum, who was assisted by Préfète Laubies.
Following the unveiling, invited guests were given a video presentation of the construction of Cité Scolaire with commentary by architect Didier Rouault.
Source: Daily Herald
Robert Weinum Cité Scolaire officially inaugurated Monday