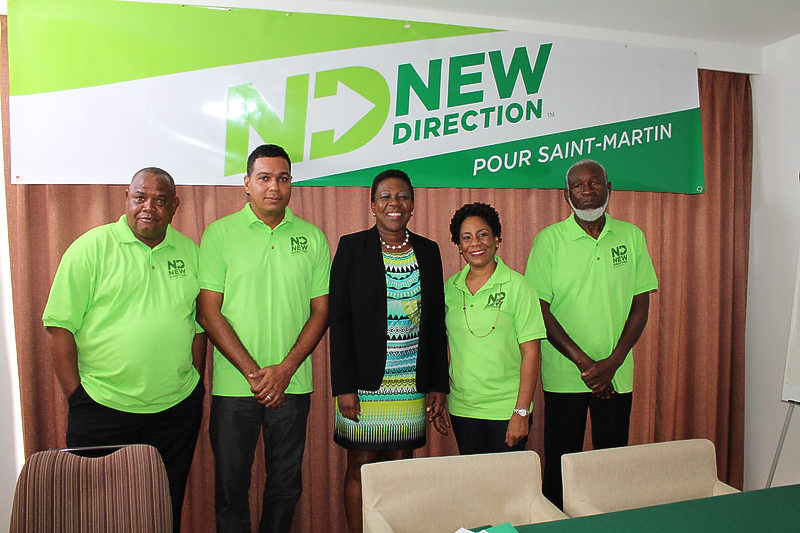 MARIGOT–Territorial Councillor and President of the St. Martin Tourism Office, Jeanne Rogers-Vanterpool, has thrown her hat into the ring to be a political candidate in the March 2017 Territorial Council elections.

Her candidacy was formally announced Saturday at a press conference with the launch of the political party “New Direction for St. Martin” at Le Mercure Hotel.

“In the opinion of a large part of the population and experts, St. Martin is suffering political instability, dysfunctioning and lack of vision,” she said in her address. “Our schools, our businesses, our youth, our neighbourhoods, our unemployed, our elders and even our sick, are suffering.

“The new skills we acquired are not enough to hold and keep the promises on which our leaders committed to in 2003, 2007 and 2012. I was part of the team that won the elections in 2012 so I share the responsibility. We worked in difficult conditions and we have tried to cope. But we must now go further and do better.”

She continued, “During these last five years, and despite the busy days, I took time to visit, share with and listen to the population and in particular the youth (those who succeed, those who are defeated, those who have a project, those seeking work) business leaders, women who fight to raise and educate their children. I have heard their expectations.

“My observation is shared by many of us, that St. Martin is dying and much remains to be done to stop the spiral of decline. I was born and brought up in St. James. I’m a young woman, mother and a business owner. I have experience both in the public sector and the private sector. This position allows me to analyse and understand a problem from many angles, perfectly adapted to find short, medium or long-term solutions.

“Over the years, I’ve assembled a team with whom I regularly evaluate the status of St. Martin, the population. Our investigation on the ground, our dialogue with the population shows that the following subjects are of prime concern; youth employment, school failure or dropping out of school early, closure of shops in the heart of Marigot, a rise in juvenile delinquency, early pregnancy of girls, inadequate tax, many young people without nationality, (French or foreign) the 50 pas Géometriques files, etc.”

Asked by a reporter whether her candidacy could be construed as a conflict of interest as she is still part of the current majority party, she said her intentions were already made known to President Aline Hanson and she felt no need to resign.

Aside from those present, Rogers-Vanterpool did not divulge her complete list of members.

She said the party’s programme will be sent out soon and is based on the following: “A new governance dictated by the principles of transparency, ethics and administrative performance; Economic growth through a diversified and sustainable economic development; The improvement of the standard of living and well-being of our citizens; The preservation of our environment; Education and training of our young people adapted to the peculiarities of our territory; valuing our culture, heritage and traditions; Improving the lives of our seniors; The relevant use of new technologies, and new infrastructure under a multi-year plan, etc.”