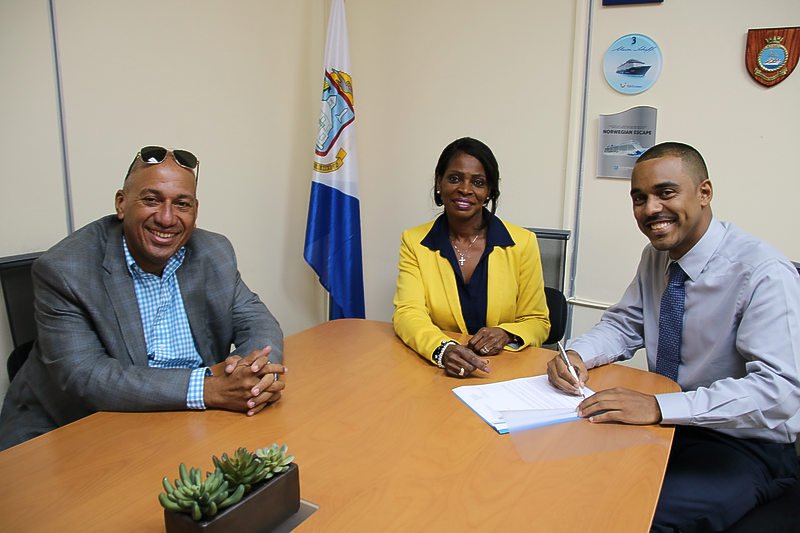 PHILIPSBURG–Young local businessman Rolando Brison has been appointed Director of the recently-established St. Maarten Tourism Authority (STA). He signed a one-year contract with Minister of Tourism and Economic Affairs, Transport and Telecommunications (TEATT) Ingrid Arrindell in the presence of Member of Parliament (MP) Silvio Matser.

“Since taking office I wanted to see this important body of Government move in the right direction. It has been years that Government wanted to establish the STA but they could not complete the process. This is a historic day for St. Maarten as we see the new director take office and move the organisation forward with his fresh ideas,” said Minister Arrindell during the signing.

Brison was selected out of 12 applicants, according to Arrindell. She continued to praise the young entrepreneur, who impressed the selection committee with his passion and determination to market the island to the best of his abilities.

Matser said Brison came from a strong family would continue to be a proponent of giving young people the opportunity to work to move the island forward. “This is putting our money where our mouth is. We don’t talk about establishing a fully active STA, we make sure it happens,” Matser added.

The purpose of the STA is to assist temporarily in carrying out the tourism policy of the Government of St. Maarten as a tourist destination; to support the growth of St. Maarten’s land- and sea-based tourism by providing the public and private sectors with focused, sustainable and productive marketing; and the enhancement of the visitor experience.

Brison will be in charge of setting up the STA office and beginning to market the island. Funds destined for the St. Maarten Tourist Bureau will not be managed by STA. The next step will be for Government and STA to sign a service-level agreement, according to Arrindell.

“We have to really look at what the current situation is before we start talking about challenges the STA might face. We need to do some good market analysis of where we need to market the island and find the real cost-effective measure to attack with,” said Brison. “Product development is another factor we need to work on. Our hotels and tourist attractions need to be looked at to make our product more appealing to those coming to the island.”

Arrindell reiterated that it was a great achievement for her and the island to have Brison on board and wished him all the best with his new position.

Matser assured the public that Brison’s appointment had nothing to do with politics, that it had to do with making the best choice for the country.

The STA also will assist, guide and direct all matters related to tourism, whether on initiative from the public sector or the private sector. The STA Foundation will execute these tasks until Government has incorporated the STA in the form of a so-called independently governed body (“Zelfstandig Bestuursorgaan” ZBO), which immediately on its incorporation will be solely responsible for and solely authorised to execute these tasks.