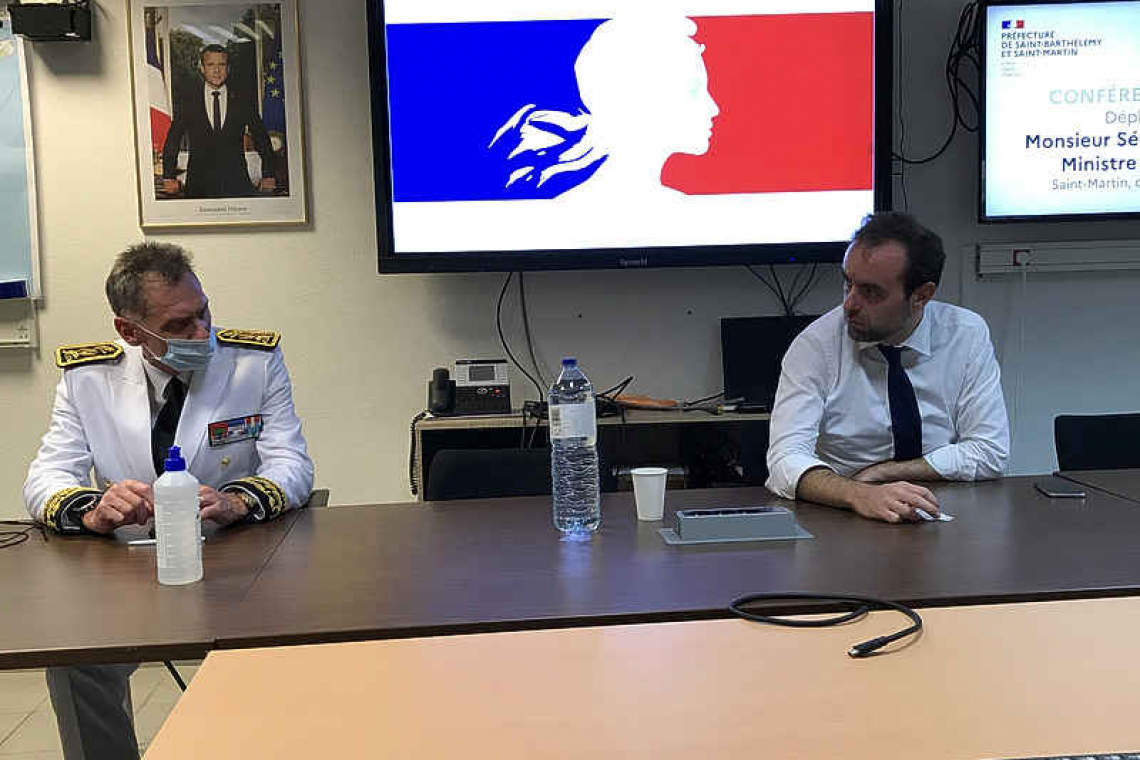 MARIGOT–French Minister of Overseas Territories Sébastien Lecornu said at a brief press conference in St. Martin on Sunday following his official visit to Guadeloupe, Martinique and St. Barths that roll-out of vaccines for protection of the population will “logistically be more complicated” for the overseas territories compared to France in terms of having seamless transportation and distribution to maintain the vaccine at the correct temperatures.

The minister has been in Guadeloupe and Martinique over the new year to assess management of the COVID-19 crisis as well as determining material and human resources. He also attended a round table in St. Barths with tourism professionals.

He said the specific freezers have been delivered to Martinique and Guadeloupe, but not yet for St. Martin and St. Barths. He said it will be important to know the needs of St. Martin so the exact number of doses can be delivered from Guadeloupe. It is envisaged that the Gendarmerie will need to ensure safety of the vaccine during transportation and distribution.

Préfet Délégué Serge Gouteyron will be meeting Regional Health Agency ARS Director-General Valérie Denux this week before making a statement on the vaccination campaign, probably at a press conference.

The vaccination schedule will be the same as in France. Vaccines should be delivered for the Northern Islands in mid-January.

Asked about progress with the new version of the natural risk prevention plan PPRN he said that most of the Lacroix commission recommendations will be incorporated and that he was committed to getting it done, given its importance and even if it takes more time. However, he declined to give a date as to when it will go to a public enquiry, only saying “very soon.”

Lecornu emphasised his intention to have closer cooperation with Dutch St. Maarten, the Collectivité and the Netherlands, for “more fruitful and regular exchanges.”

He recalled he had had a 30-minute meeting with Dutch Minister of Foreign Affairs Stef Blok on December 11 during a video conference discussing Franco-Dutch cooperation in the Caribbean.

The exchange of views confirmed the convergence of views between the two States. The Netherlands and France intend to strengthen their cooperation, particularly at sea, to combat trafficking. and the ministers stressed the two countries’ commitment to support the territories and to promote economic development in accordance with the law.

This latter subject prompted the press to ask about the Oyster Pond border dispute and whether there is any sign of a decision. Lecornu said “technical discussions are ongoing between the relevant services in The Hague and Paris”, but declined to offer any prospect of a decision and when.

He said he had received an invitation to The Hague in 2021 where he intends to put French St. Martin and Dutch St. Maarten on the agenda.

Also present at the press conference with Préfet Gouteyron and Minister Lecornu was Philippe Gustin, the former Minister for reconstruction of St. Martin and St Barths after Hurricane Irma who is now Lecornu’s Cabinet Director.