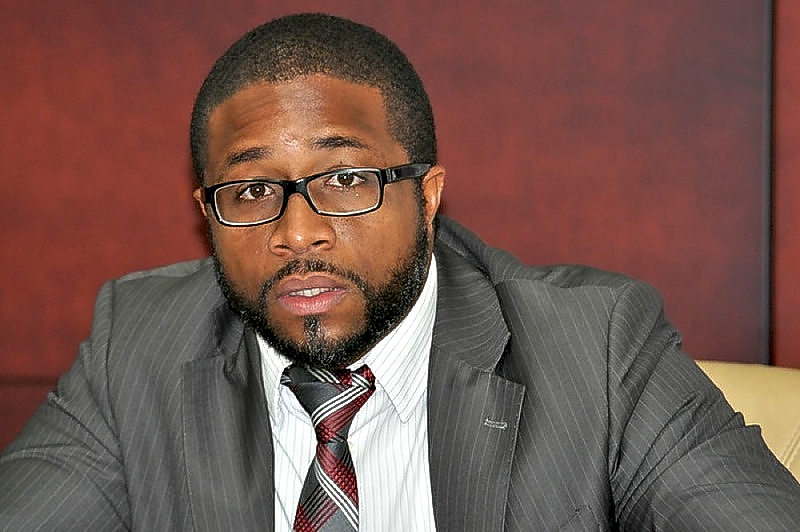 PHILIPSBURG–Former Member of Parliament (MP) Romain Laville (38) was sentenced by the Court of First Instance on Wednesday to a suspended prison sentence of one month, on two years’ probation, for the illegal possession of a firearm with ammunition.

He was acquitted of two counts of threats.

Laville was charged in the so-called “Zeepaard” and “Sardine” investigations with two counts of threats against former MP Jules James on June 11, 2012, and against musician Isidore “Mighty Dow” York on November 28, 2012.

He also was charged with the illegal possession of a Beretta firearm with 137 pieces of ammunition, between January 1, 2013, and March 26, 2015.

For all these crimes, the Prosecutor demanded 12 months, six of which were to be suspended, on two years’ probation, with 80 hours of community service.

Laville denied he had threatened to kill or shoot anybody.

Laville and James had a confrontation outside the Parliament building in June 2012 during which, according to James, Laville said he would shoot and kill him.

Laville told the Judge that he had had a difference of opinion concerning the political course of the United People’s (UP) party with which he was affiliated at that time; for instance, concerning the mass layoff of 180 workers at the former Pelican Resort, of which James was the general manager.

“I was the fraction leader of my party and was very disappointed in James’ position in the debate on this matter,” Laville said. During an emotional debate held in November 2011, Laville gave a passionate speech in support of the former Pelican employees, but when it came to a vote on a motion that would have condemned James, Laville left the meeting without casting his vote.

Laville said he had not spoken with James for months prior to the June 2012 altercation. “My life and security were threatened from when I declared myself independent,” Laville stated. “That day in June, James came to antagonise me. We were upset. I will not deny the use of foul language; we both did. But I did not say that I would take up a gun and shoot him. Absolutely not.”

Laville said the alleged threats made against pan virtuoso Mighty Dow were “absolutely not true.” He agreed he had been in discussions with the artiste concerning the non-payment of a US $15,000 fee for a performance for Tempo network. However, Laville said he could not be blamed, as he had only been an intermediary for his long-time friend.

“The situation with Dow was really unfortunate,” Laville said Wednesday, stating he had only shown the firearm in jest. “Dow and me go back from since 2005. Dow knew I had a gun and joked about it.”

Laville confirmed he had had a firearm since August 2012. However, the licence expired December 31, 2012. Laville said he had applied for a new permit with the Minister of Justice, but had not been successful in obtaining one to date.

According to the Prosecutor’s Office, Laville was not entitled to a new licence as he had been the subject of a criminal investigation.

Laville, on the other hand, claimed there was no official gun policy. “I did exactly what I was supposed to do,” he said. He said he had kept his gun in his safe, but sometimes took it with him because he was threatened; for instance, by James.

Laville, who is contesting the September 26 election on the United St. Maarten Party’s (US Party’s) slate, was held in custody for one day. The owner of a water sport company said his arrest had been “very uncomfortable” and a “scary and worrisome” situation for his mother and for his fiancée, who was pregnant at the time.

Prosecutor Martin van Nes considered all charges proven, including the firearm possession. Stating the lawmaker should have known better, he said Laville had been entitled to carry a gun only in 2012. There was no evidence that the former MP had applied for a renewal in 2012. Only in 2014 had Laville submitted two applications for a new licence, the Prosecutor said.

According to attorney-at-law Shaira Bommel, the Prosecutor’s case against her client should be declared inadmissible. The complaints about threats were made in 2012, but her client was not subpoenaed until four years later in what could not be considered a “big case,” as the lawyer put it. She said there was insufficient evidence of threats and claimed her client had followed procedures and had been in possession of a valid permit for a weapon.

The Judge accepted the case, as Laville’s prosecution had officially started when he was arrested approximately one year and six months ago.

As to the threats made against James, the Judge found it proven that Laville had said that if he had a gun “at that time” he would have shot James. In itself, this was considered a threat against somebody’s life. However, the Judge said, this statement may have been rude and intimidating, but as it had been made while Laville was very emotional, it should not be considered a threat.

Also in York’s case no evidence of threats were found, as the statements had been made in a “joking atmosphere,” the Judge said.

The Court found illegal firearm possession proven, as it could not be ascertained that Laville had requested the renewal of his permit on time. “He should have known better and should have turned his weapon in,” the Court said. However, considering the circumstances of the case the Court did not find an unconditional prison sentence warranted.

Laville announced later on Wednesday that he would appeal the verdict, claiming he had been convicted because of a technicality.

“While a gun policy is lacking in St. Maarten, one is not found guilty of not being in the possession of an illegal firearm; rather, one is found guilty of the fact that the first of three letters of my renewal to the Minister of Justice could not be found, while there is a witness statement confirming the submittal of all three renewal request to the Minister,” he stated.

Laville said he was “elated” that he had been acquitted of the gun-threat charges. “The Judge clearly saw through the case for what I have been saying all along, which is that this whole situation was politically motivated and with no basis whatsoever,” he said.