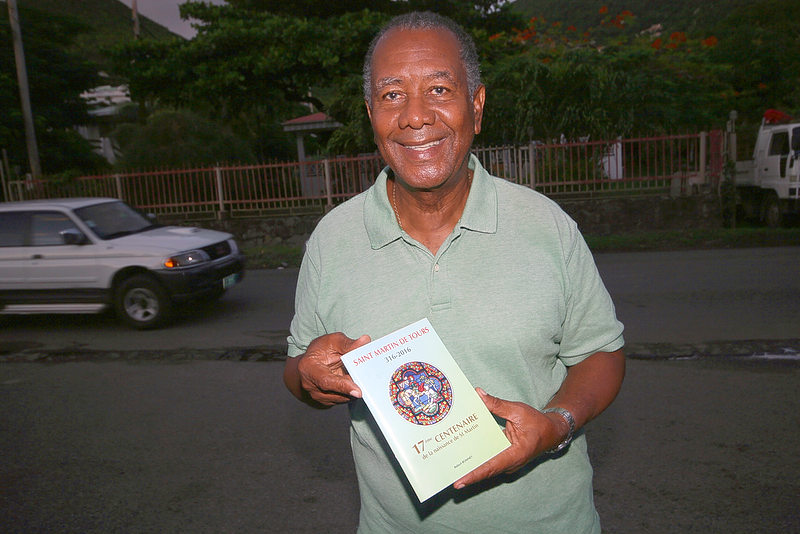 MARIGOT–Former Recteur’s Representative of the Guadeloupe Academy in St. Martin, English Language Inspector and author, Robert Romney, is something of an authority on the extraordinary life of Saint Martin of Tours, who was born in 316 AD in the Diocese of Pannonia (now Szonbathely, Hungary), a man who left an indelible stamp all over Europe in the fourth century.

This year just happens to be the 17th centenary of Saint Martin’s birth and Romney, now retired, thought it particularly fitting to produce a booklet celebrating the life of a man whose name was taken by Christopher Columbus on his second voyage in 1493 to name our very own island.
Saint Martin died on November 8, 397 AD and was buried on November 11.
Some 300 of the free bilingual booklets which have a preface by Bishop Jean-Yves Riocreux of Basse Terre and Pointe-à-Pitre, Guadeloupe, were distributed on St. Martin Day.
Romney has written a concise, easy to read, condensed version of Saint Martin’s life, and makes no secret of his puzzlement and frustration over why this man’s great history is not celebrated more within the cultural life of St. Martin, studied in the school curriculum and celebrated with life-size statues bearing his resemblance or with other symbols and references.
Currently only a small plaque outside the Catholic Church, Marigot, refers to Saint Martin of Tours. Romney himself had once sketched out a plan to have a three-metre- high statue of Saint Martin made by sculptor Théo Bonev to be placed at the tourism office roundabout; presumably it is a plan that could be reactivated if the interest is there. The Catholic Church also holds every year nine days of prayers for Saint Martin of Tours, but as Romney points out again, it is poorly attended.
“I have no political views or aspirations and I’m not a historian, but I try to promote St. Martin and its history,” says Romney who now lives in Guadeloupe. “People say to me St. Martin is devoid of culture. We need to celebrate our heroes, Saint Martin being one of them.”
Even elected officials on both sides of the island expressed only scant interest when Romney proposed projects and reciprocal exchanges in St. Martin and Tours in France to celebrate the man’s life and to create more awareness. Why such little curiosity and interest he asked? After all Christopher Columbus was sufficiently in awe of Saint Martin’s good deeds in Europe to name the island after him.
As Bishop Riocreux points out in his foreword, “In France 3,600 churches, 485 hamlets were named after Saint Martin, and from France to Mexico, to Spain, Colombia and Peru, hundreds of towns and villages were named after him.”
Romney’s interest in Saint Martin took him to the city of Tours in October 2015, on an invitation from Antoine Selosse, President of the European Cultural Center of Saint Martin of Tours who was very keen to spread the word about Saint Martin. He also met the former Mayor of Tauxigny, a small parish of Touraine. The trio visited the church in Candes where Saint Martin died, to see the casket and the spectacular stained glass windows depicting events in Saint Martin’s life.
“Saint Martin of Tours is considered the first European,” Romney says. “His impact was felt from Hungary to Slovenia, Croatia, Italy and France, but also in Holland, Belgium and England. His name is present everywhere. Thousands of towns are named after him. Even in London – Church of St. Martin-in-the-Fields.
“He was a symbol of charity and solidarity; he loved the poor, the weak and the downtrodden. He gave all his money to the poor. He lived on his own as a humble poor man, originally as a monk. He also built the first monastery. We know this from the informed historians of the time, but there were also many legends and miracles connected to him.
“He walked everywhere on his travels, one reason why he once got attacked, tied up and beaten on a journey over the Alps,” Romney continued. “He spoke to the robbers about God and even converted one of them. He also nearly poisoned himself from eating suspect herbs.
“He was given the name Martin because it came from Mars, the God of War in Greek mythology. His father was a high ranking Roman officer and wanted his son to also be an officer. His father couldn’t accept it when his son at 25 quit the army. The famous story of Saint Martin cutting his mantle in two to cover a poor beggar freezing to death when everyone else passed him by led to him being ridiculed. The mantle or cloak was a symbol of Saint Martin’s rank but belonged to the Emperor, not the soldiers or officers. When officers and horses had to be neat and tidy, his action was unheard of and breaking the law.”
Romney disclosed this year some 18 country delegations descended on Tours for the anniversary celebrations, but expressed disappointment there was no representation there from St. Martin, the island, or representatives of St. Martin in France. It was a coincidence also that the Pope had declared 2016 the year of divine mercy.
“Did you know that the patron saint of Buenos Aires is Saint Martin of Tours? They had a delegation there, so did Holland, England, Belgium and other countries.”
There is another little known connection to Saint Martin of Tours and November 11 that was found among archives in the church at Candes, Romney adds. At the Armistice Day signing to end the 1918 world war on November 11, General Maréchal Fourche of France gave thanks to Saint Martin of Tours in his speech.
Two major feasts are celebrated in honour of Saint Martin: the anniversary of his death on November 11, and July 4, the anniversary of his ordination as Bishop of Tours in 371 AD.