Home Local News Roosevelts were in Statia more than 180 years before FDR |... 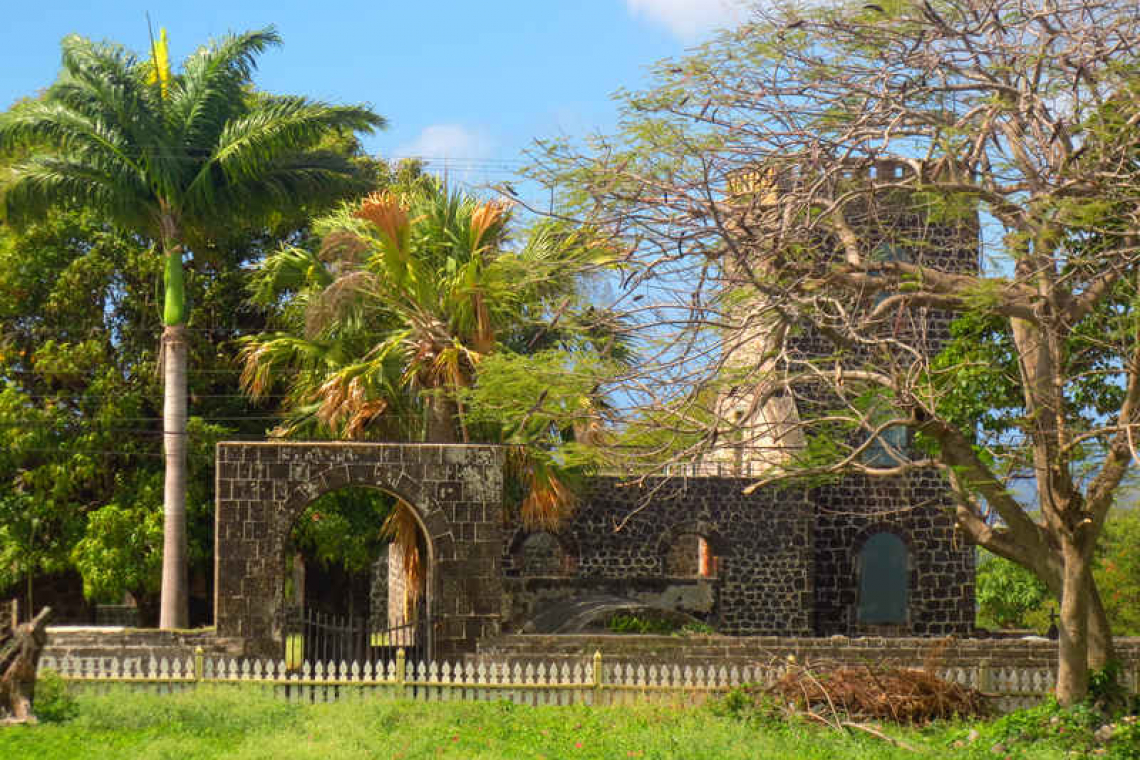 The remains of the Dutch Reformed Church where Adolphus Roosevelt married Elizabeth Groebe in 1759.

ST. EUSTATIUS–The plaque on the flagpole in Fort Oranje in Statia, presented to the island by United States (US) President Franklin Delano Roosevelt (FDR) in 1939, is the most concrete recognition of the significance of the “First Salute” in the shared history of the US and St. Eustatius.

Research in Statia’s archives now shows that the family of FDR were on the island more than 180 years before his visit to the island’s harbour in February 1939.

Statia historian Walter Hellebrand, curator of the island’s historical museum, stated, “The Roosevelt family have always been very aware of their history. So, I believe when in 1939 the fact of the first-ever official salute to the flag of the newly-created US in 1776 was brought up, it triggered FD’s memory of an earlier episode of his own family’s involvement with Statia in those very same years. Adolphus, the brother of his forefather Isaac, settled in Statia to represent the family’s interest in the sugar trading business.”

Isaac was a merchant who made his fortune in New York with the refining of sugar. Most of the western world’s sugar came from the Caribbean where it was cultivated and processed by enslaved labourers. Statia became the linchpin of the transatlantic trade at the time, so Isaac’s younger brother Adolphus was sent out from New York to man this important post. The fortune Isaac made through the sugar industry, along with his political accomplishments, became the foundation for the rise of the Roosevelts to the ultimate position of FDR as US President.

Adolphus arrived in Statia a bachelor in his early 20s. Hellebrand explained, “The big difference with the Hamiltons who came here to seek anonymity and opportunity is that Adolphus arrived as the representative of an important New York business partner of the merchant-planters of Statia’s establishment.

“It is interesting to see that in 1759 not only did he marry a daughter of one of the established planter families, Elizabeth Groebe, but the current island governor Jan de Windt and Pieter Runnels, an island council member, were witnesses at his wedding in the Dutch Reformed Church. That seems to indicate that he was an influential person on the island.”

His brother Pieter also came to Statia from New York as a witness for the wedding.

“It is also intriguing that in the census lists, despite his position, Adolphus Roosevelt isn’t listed as a slave owner,” Hellebrand continued. “It is when his widow, Elizabeth Groebe, is listed in 1778 and 1779 that she is registered with enslaved men, women, boys and girls.

“Of course, it could be that in Adolphus’ household the enslaved servants belonged to his wife’s family and when he needed porters, rowers, stevedores, etc., for his business, he hired enslaved labourers from someone else. That was an established practice in Statia.”

According to Hellebrand, Adolphus’ descendants ended up becoming royalty.

“His daughter married the grandson of the Statia governor Jan de Windt who was a witness at his wedding. She became the great-grandmother of the first white queen (‘Ranee’) of Sarawak (now a part of Malaysia on Borneo). Her son was the last ‘White Rajah of Sarawak’, who formally abdicated in 1946. His name was Charles Vyner de Windt Brooke.

“De Windt is not only in the name of a dramatically located fortification in Statia, but also in the name of the last European monarch in the Far East – linked through a bit of US presidential history,” Hellebrand concluded.