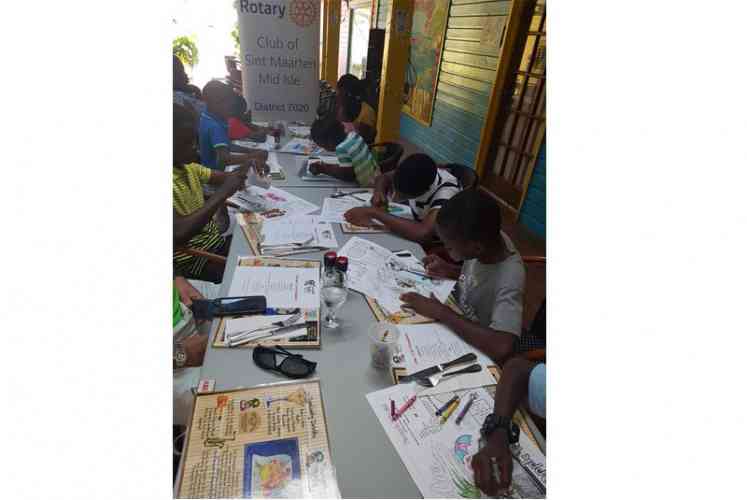 I Can Foundation children working on Rotary Mid Isle project.

SIMPSON BAY–Rotary Clubs in the region were asked to engage in a hunger project and “Rise Against Hunger” on or around Valentine’s Day in their communities.

Each club was asked to decide for itself how it wanted to participate. It could be something as simple as donating money to an established hunger programme, or organising a full-fledged meal event as a club service project.

Rise Against Hunger is first and foremost an effort to put food on an empty plate, to fill an empty stomach, to bring a ray of hope to the hungry. It is also a chance for Rotary to show thousands of communities throughout the zone what Rotarians can do when they are inspired to Rise Against Hunger.

The members of Rotary Club of St. Maarten-Mid Isle donated their fines collected in February to this project. The club decided to give a breakfast and a lunch to children in the community.

The Happy Bookers were fundraising to support the libraries on both sides of the island that were damaged by Hurricane Irma. In partnership with Pineapple Pete, Mid Isle planned a lunch at Pineapple for the children of the I Can Foundation Home. The children enjoyed a special menu which included ice cream. They also enjoyed doing a colouring and activity worksheet while waiting for lunch.

Due to the lunch being sponsored, the remaining funds were used to purchase food items for Community Outreach Mentorship and Empowerment Centre (COME). After the passing of Hurricane Irma, COME Centre embarked on a project to provide a hot breakfast and lunch for those persons in the community who were in need of a hot meal on a daily basis. It currently feeds approximately 75 per day.