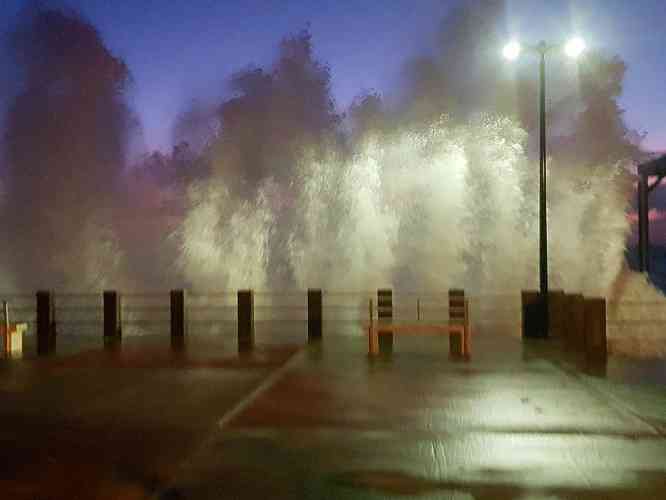 High waves hitting against the boardwalk.

ST. EUSTATIUS–Rough seas caused “many disruptions” in St. Eustatius over the weekend.

The waves from Tumbledown Dick Bay to Crooks Castle caused some “fish pots” to wash ashore with lobster and other sea life inside.

Some waves were so high that the water splashed onto nearby streets resulting in vehicles stopping to avoid the splash.

One restaurant located near the water had to close its shutters as the heavy waves knocked against the restaurant structure. Vessels that were moored at the Charles A. Woodley Pier had to be removed because the water was coming over the breakwater and the pier.

A St. Eustatius Fire Department personnel along with some other adults were concerned when minor children began to play at the edge of the boardwalk where the waves landed, not being aware of the danger of potentially being swept into the ocean. Some persons were happy for the rough seas coming from the south as it was bringing back the sand to the beach, especially for the upcoming Easter holidays, as some beaches were eroded during the September 2017 hurricanes.