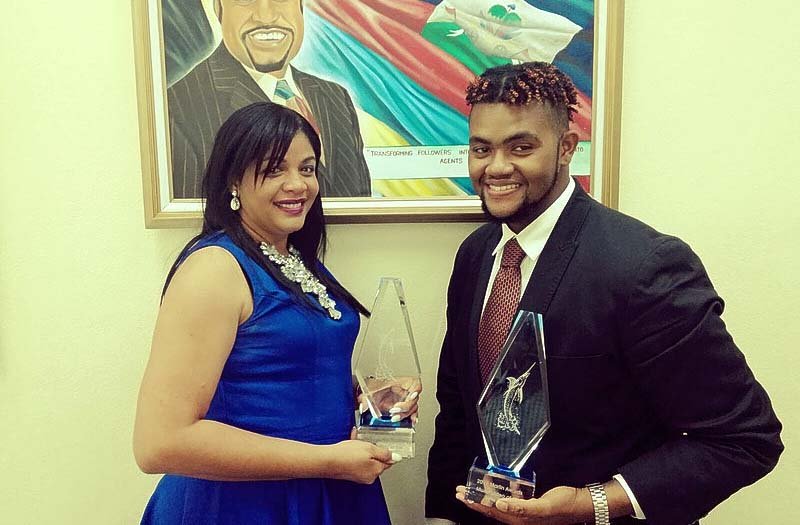 Roxsy and Shawn J with their awards.

Both Shawn J and Roxsy were in the same categories as some well-known artists such as Papa San, Sherwin Gardner, Positive, Carlene Davis and Nigel Lewis, amongst others.

Roxsy has a long history in music in St. Maarten. She was a backup singer with “Youth Waves” and has done background vocals for artistes such as Dr. Alicia Liverpool, Gissel James and Jervier Honore, amongst others. She also featured on Tempo Turn 7 with Dr. Liverpool’s on the song entitled Great things. “Shake It Off,” Roxsy’s debut album and her first music video entitled “Speechless” were released on November 1, 2014 in St. Maarten. In October 2015, Roxsy received a letter informing her that her Album “Shake it off,” was chosen to be nominated at the Rhythm of Gospel Awards which is in the top three Independent Awards Shows in the United States (US). Her Album was nominated in five categories. She won the award for Holy Hip Hop/ Instrumental/Alternative Gospel CD of the Year last year.

Shawn J is a songwriter and a vocal coach who offers private vocal training classes and as a result, some of his students are already winning competitions and releasing singles of their own. “Long Road,” Shawn J’s first debut album was launched in 2014 together with a music video for the title track. In October 2015 Shawn J received a letter informing him that his Album “Long Road” was chosen to be nominated at the Rhythm of Gospel Awards. His Album was nominated in six categories. Shawn J has shared the stage with artistes such as William McDowell, Positive, Sherwin Gardner, Kevin Smith and DJ Nicholas, amongst others.