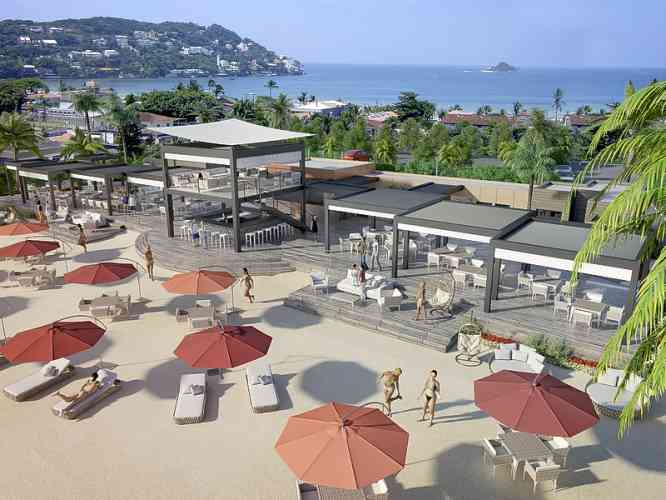 SIMPSON BAY–Kim Sha Beach will soon be welcoming a new restaurant on this golden strip of sand in the heart of Simpson Bay by the name of Roxxy Beach, a restaurant that promises to add a touch of sophistication and French flair but tempered to meet the tastes of an international market.

It’s no surprise to learn that running this new establishment will be Gerald “Gerard” Ravel, a dynamic restaurateur who made an overnight success of Kon Tiki, the first of the five-star restaurants on Orient Beach back in 1991 and went on to more success with Le Sand in Baie Nettle.

In 2002 he went to Budapest, Hungary where his wife is from and started a catering business there but returned to St. Martin in 2012 to open Le Sand.

An unnamed American investor and frequent visitor to the island is behind Roxxy Beach which is due to open in October/November of this year. Ravel indicates the cost of the project has not been finalized but is in the region of US $1-million. He met the investor at Le Sand a year ago where the project was proposed to him.

“It’s a traditional beach restaurant concept of restaurant, bar, watersports, chairs and umbrellas and open for lunch and dinner,” Ravel discloses. “The water sports concession will be run by Mark Sollinger who has a lot of experience and knowledge and that’s very important for us.

“We plan to be better than the restaurants on Orient Beach, offering good service and a high standard, but not too high. I’m sure we can do it. Kim Sha is a beautiful spot. We will do a bit of everything with an international menu, sushi menus, pizzas and a rotisserie. And there will be an up-market cocktail bar too. We want to be as good as we can be. The island needs to get better and better, better than before, so we can attract the tourists back, back to ‘La Friendly’ island!”

Key positions in the restaurant will be filled by experienced professionals but Ravel is very keen to train young St. Maarteners in food service and is hoping to make contact with a catering college for a working relationship.

“The experienced employees in each sector can train these kids, whether it’s in the bar, kitchen or restaurant. It’s important these kids have a career and a future,” he adds.

The restaurant will also hold special events and parties, but he assures he will not upset the neighbouring hotels and residents, promising to close not later than 1:00am on those nights. “I prefer to be respectful and not make enemies.”

According to Ravel the restaurant will have a deep concrete foundation at the front to support and protect the restaurant from any storm surge, and erosion of sand and on top will be a large wooden deck with four gazebos. The concrete aspect is what makes the project expensive, he admits.

Asked why he chose to come to the Dutch side after a history of success on the French side, Ravel said it was an opportunity too good to miss.

“Rebuilding of those restaurants on the beach in Baie Nettle will be at least a year or two years away. In any case it’s not sure what is going to happen there until the new Plan de Prevention des Risques Naturelle (PPRN) comes out next year. I believe Le Sand will be rebuilt. But opening up Orient Beach is the priority right now.”

He is looking forward to the challenge of opening Roxxy Beach and is impressed by the high standards of restaurants on the Dutch side, especially in Simpson Bay.

“It can’t all be mass tourism, so it’s good to have up-market restaurants too. The Dutch side still has a lot of potential and it has more hotel rooms than the French side.”