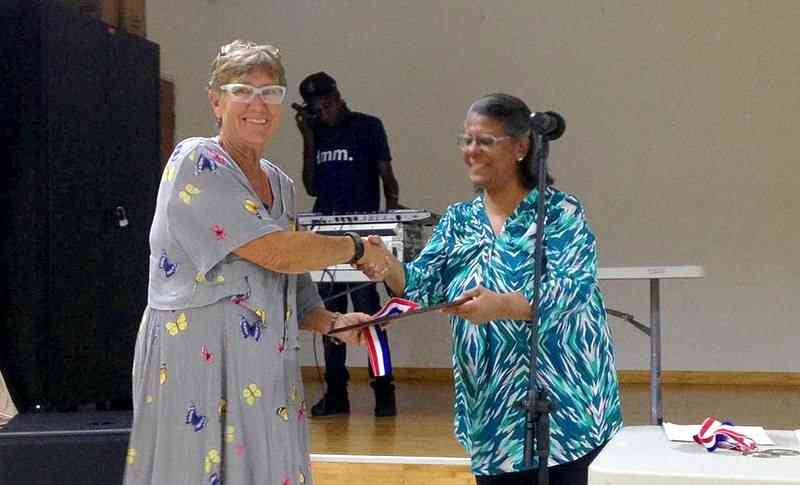 SABA–The Malofi Foundation and Lorsim Productions presented the 2017 People’s Choice Awards Thursday evening at Sunny Valley Youth Centre in The Bottom. Awards were handed out in a host of categories with Roy Smith being elected Person of the Year.

Former employee of utility company GEBE Smith was presented with an award for his community-oriented work. He did several jobs, and was chairperson of different organisations, such as The Honourable Henry Carlyle Every Home for the Aged and the Lions Club.

In the category Business and Economy, the award for Best Organisation went to The Red Cross Saba, which helped to distribute water and food to those in need after hurricanes Irma and Maria.

Windwardside’s supermarket Big Rock Market (BRM) was elected Best Store. The award for Best Gift Store went to souvenir and gift-shop Everyt’ings in Windwardside. The Best Restaurant may also be found in Windwardside as the honours in this category went to The Hideaway. The award for best Hotel/Guesthouse went to Queen’s Gardens Resort in The Bottom.

Nurse at A.M. Edwards Medical Centre Kenrick Lake was elected Best Employee and Wim Schutten of Juliana’s Hotel in Windwardside was presented with an award for Best Employer.

In the Music and Art category the award for Best Band went to The Rythm Youngsters, consisting of Saba Comprehensive School’s secondary school students.

Assistant teacher at the drum band of Child Focus went to Budu.

Joan Bourque, who made several inspiring wall paintings in Saba was presented with the award for Best Painting.

There were also awards presented in the Sports and Education categories. These went to Saba Volleyball Association for Best Team. Best Female Athlete was Adriaan Nation, who attends Sacred Heart primary school.

The honours for Best Male Athlete went to young boxer Ludwig Charles. The former student at Saba Comprehensive School (SCS) is now continuing his education in the Netherlands. The award for Best Coach was for youth soccer coach and BRM employee Alejandro Londono.