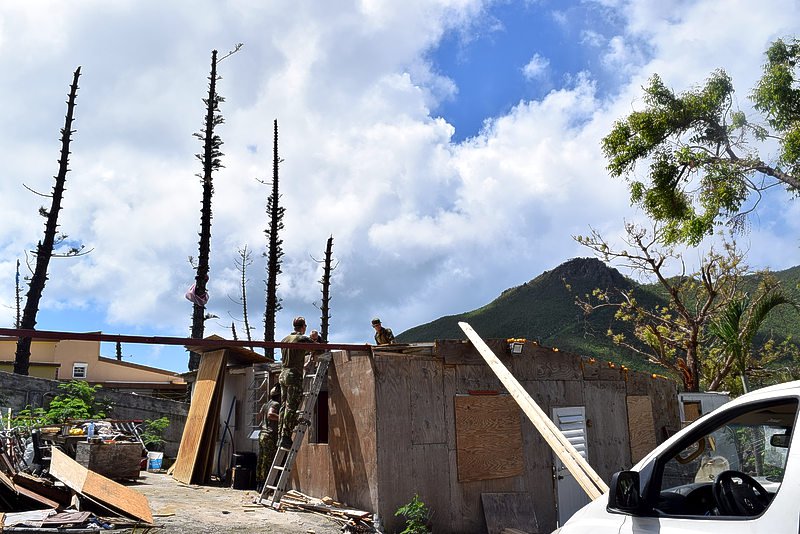 SAUNDERS–When Rulof Karel (63) and friend picked up tools to fix his hurricane damaged roof, the last thing they thought would happen was a team of Royal Dutch Army Engineers driving on their street stopping to give them more than a hand. In fact within four hours, the small house had a new durable roof.
Karel told The Daily Herald he was grateful for the help. “A good friend of mine came to help me and the next thing we saw is these guys come by and asked if they can help. I asked what I had to do and they said I just had to sit and relax.” He opted to do just that while keeping an eagle’s eye on the progress.
Four hours on, he could start reorganising his home under a new steady roof. The one before had withstood Hurricane Luis in 1995.
Karel’s house was the 10th building Corporal Sander Foks and his team had fixed in the past weeks. His house, with a splendid view of Sentry Hill, the highest point on the Dutch side, also marked the highest the engineers could climb without safety belts. The highest they can go without safety belts is 2.5 metres.
Before taking care of Karel’s house, they had fixed a home in Dutch Quarter allowing the woman and her children who lived there some much needed comfort after the ravages of monster Hurricane Irma.
When it comes to houses, the team seeks out the elderly and women with young children who have no immediate access to repairs. A prerequisite is that the houses they fix do not have insurance. Those with insurance will have to wait for their claims to be processed.
Their major project was at Hillside Christian Primary School. The team spent some time there getting the school ready for pupils to return at the end of September; they were still there when classes resumed and took time out to interact with the little ones.
After the repair works, tying shoelaces and giving power punches, the team were given medals by the school – hand-woven St. Maarten flags. Each engineer was presented with a medal in a special school ceremony. They said their goodbyes, packed up their tools and moved on to their next project.
The lasting impression that made on the young lives they encountered would be revealed to them in an unexpected way.
Foks was busy on a rooftop some days after finishing at the school when he heard his name called out. Turning, he saw a car slow down, some children smiling brightly at him and the team. “They were children from the school. They were calling ‘Sander, Sander,’” he said smiling.
At Sister Regina Primary School in Simpson Bay, they may have done more than mend the roof. They may have inspired some pupils to consider joining the Royal Dutch Army and specially the engineers corps.
Sergeant Van der Ende, who led the Regina team, said pupils questioned constantly about what it was like in the army and were curious about how they could join when they got older.
“The teachers and children were happy to see us working on the school. We are also happy doing it,” said Van der Ende, and this showed in their continued work after the school was fixed. They moved on to the adjoining basketball court to erect a new fence and used the leftover fencing materials to craft football goals.
The team also tackled repairs at Leonard Conner Primary School in Cay Bay.

Bonding
The kinds of personal connections made by the engineers with the community they work in are seen as important as the repairs they made, said Major Maarten Zomer, who leads the corps of some 180 engineers.
“It is a very good feeling when I see the connections made and to see my team’s reaction. Many of the guys wish they could stay longer. They see the amount of work still to be done and they feel the warmth of the communities they work in,” Zomer said.
Ensuring there are real connections did not come by chance. The engineers were teamed up and assigned specific neighbourhoods. This allowed them to get to know the community. Zomer said the result has been residents reaching out to the teams to let them know where help was most needed and their presence also acted as a boost for the communities. “They were like magnets in the communities.
“People see them working and they don’t feel like they are busy by themselves,” he said.

High impact
Zomer said the focus is on “quick, but lasting fixes and high impact projects.”
Several of the projects were anything but quick fixes. One on the list is Sundial School in Philipsburg. Here, the engineers are fixing the roof over the school’s teaching kitchen and La Source restaurant, and tending to electrical work. This is high priority project because getting the kitchen up and running is essential to the meals programme to be carried out by the Red Cross.
The care organisation will prepare some 8,400 meals every school day. The aim is to give every school-going child breakfast and a warm lunch.
The Sundial team includes a number of very experienced carpenters. The engineers have fixed some 18 schools with biggest projects involving roof repairs. To date, they have carried out some 197 “saw” jobs – cutting down and trimming of trees, 189 small jobs – fences etc. and 120 roof repairs covering public buildings and homes.
While some residents who need assistance are found by the engineers in the neighbourhoods they are assigned to, the engineers have a list of people with the most urgent needs. The list was compiled with input from the Ministries of Public Housing Vromi and Public Health, the White and Yellow Cross (WYC) Foundation. The Red Cross has assisted with location assessments to help determine the 50 most vulnerable residents.
The larger projects included getting the Post Office temporary location up and running and outfitting Festival Village to house hurricane displaced residents. Part of that job involved building a shower room with 10 stalls out of a 40-foot container.
The engineers are using all material from Kooyman Megastore for their reconstruction and repairs.