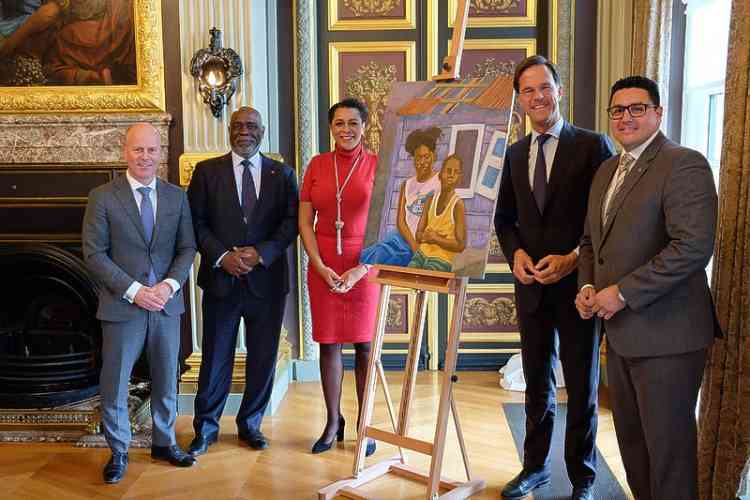 THE HAGUE–It was a special moment for St. Maarten artist and cultural ambassador Ruby Bute and for the island itself when St. Maarten Minister Plenipotentiary Jorien Wuite presented one of Bute’s paintings to the Kingdom Council of Ministers last week Friday.

At the start of the regular meeting of the Kingdom Council of Ministers, Wuite revealed the special work the artist had painted on the occasion of one year after Hurricane Irma. The painting depicts a mother and son in front of their house which was destroyed by the hurricane.

With this painting, Bute wanted not only to thank the Dutch government and the people for their assistance and support, but also to contribute to the togetherness and partnership in the Dutch Kingdom.

The painting arrived in the Netherlands early last month and was shown for the first time during a commemorative event at the Cabinet of the Minister Plenipotentiary in The Hague on September 6, the anniversary of Hurricane Irma. The guests at the event responded very positively to the painting, which shows sensitivity and strength at the same time.

After the painting is framed, it will be exhibited at the different ministries in The Hague as well as the Second Chamber of the Dutch Parliament as appreciation for everyone who came to St. Maarten’s assistance after the hurricane.