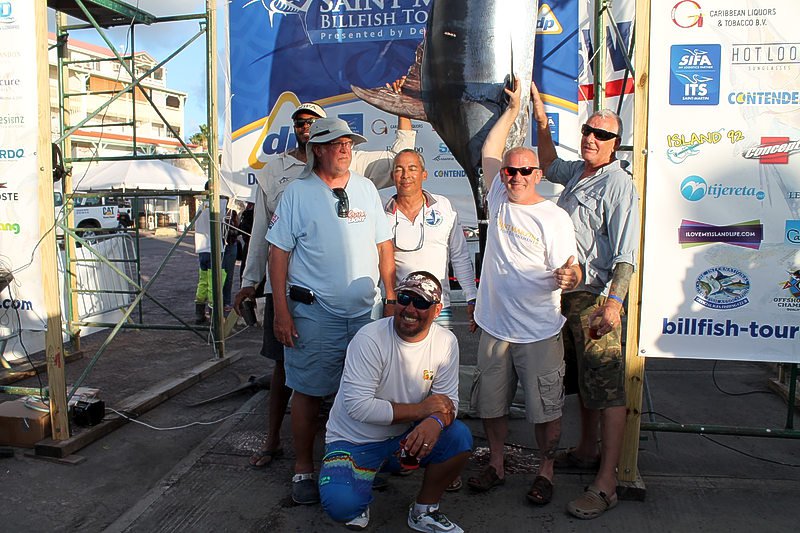 MARIGOT—Rum N Coke, a boat based in Jolly Harbour, Antigua, but with a UK crew from Portsmouth, England, weighed in a 614lb Blue Marlin on Friday, the biggest catch so far in the tournament.

The other boat to have a Blue Marlin make it to the scales was Striker whose fish weighed in at 403lbs.
Angler on Rum ‘N Coke, Martin Hobson, said he fought the fish for an hour and ten minutes.
“We sat out there for eight and a half hours with nothing doing except a Barraacuda, then all of a sudden I had this strike and grabbed the rod,” Hobson related on shore. “We were all amazed. It was about 2:50pm and we were some 25 miles out, on the edge of the Boulevard where there’s a steep drop-off to about 3,000 ft.
“There was quite a bit of activity there.  Luckily it took the bait straight away, and it was a reversed circle hook that we used. Just goes to show patience is a virtue. You never know with fishing.  Of course it was a 100 per cent total crew effort but for me it was the second Blue Marlin I’ve caught.”
Ironically it was bad luck for the BWA Yachting boat “Rogue” that was in the same area just earlier and had more than one strikes. The crew were convinced that it was the same Blue Marlin that Rum N Coke caught.
Accumulated results after two days were not available by press time however it was reportedly another good day’s fishing for the 30 or so boats competing.
Fishing resumes today Saturday and culminates with the final results and awards ceremony at 7:30pm.
A good crowd has been enjoying the live bands, bars and the Caribbean Flavours food stands in the Marina Fort Louis fishing village.