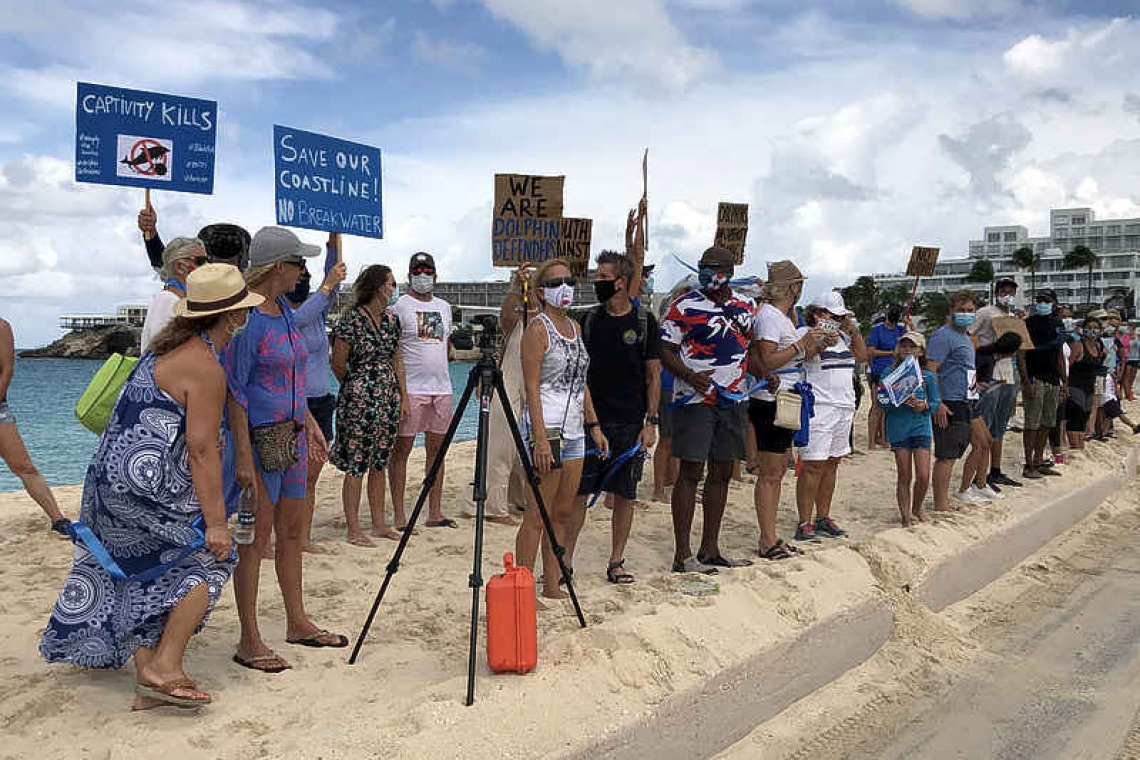 Demonstrators form a human chain along the length of Maho Beach on Sunday to protest a rumoured dolphinarium for Beacon Hill. (Robert Luckock photo)

MAHO–Some 200 persons gathered on Maho Beach Sunday morning to demonstrate against the rumoured dolphinarium project for Alegria Boutique Hotel in Burgeaux Bay, Beacon Hill, that could be the end-product of a process that involves issuing water rights and constructing a breakwater.

Organised by Dolphin Defenders SXM, a branch of Animal Defenders, the demonstration, coincidentally falling on World Animal Day, brought back memories of 2011 when an attempt to bring a dolphinarium to the commercial port in St. Maarten was successfully thwarted thanks in part to a 10,000-signature petition, lobbying of government and international support.

The gathering saw many people carrying home-made placards to get their message across. Some of them read: “Dolphins in captivity is wrong”, Save our coastline – No breakwater”, “Captivity kills”, “Stop crimes against nature” and more. The objective was to make a human chain stretching along the length of the beach, parallel to the airport runway fence.

Dolphin Defenders board member Kim Frye said the protest had been prompted by the Court of First Instance’s ruling at the beginning of September that country St. Maarten must issue an area of 13,525 square metres of water rights in long lease to Alegria Real Estate N.V.

Alegria Boutique Hotel filed an injunction on August 12, 2020, with regard to this issue, which dates back more than two years. On May 31, 2018, then-Ministry of Public Housing, Spatial Planning, Environment and Infrastructure VROMI Minister Miklos Gitterson informed Alegria that he had received a request for the issuance of long-lease rights for an area of approximately 13,525 square metres of water for the development of the hotel in providing “additional service” to tourists and “resident clients.”

In the letter, Gitterson stated that the Department of Domain Affairs was in the process of drafting an advice and the resort had been informed that the minister “in principle” had no objection to the issuance of long lease, adding that “the only construction to be allowed in the area in question is a breakwater and a sea aquarium.”

In an email message of March 6, 2020, then-VROMI Minister Chris Wever informed the ministry’s secretary-general Louis D. Brown that he had no issues with the breakwater and the pier “once Alegria can ensure no corals are damaged.”

Alegria believed that government was stalling and filed for an injunction, which led to a settlement agreement in early May in which it was agreed that the hotel would receive an area of 13,525 square metres at Burgeaux Bay.

After an exchange of several email messages, Alegria withdrew the injunction, but current VROMI Minister Egbert J. Doran was of the opinion that government lawyer Aernout Kraaijeveld, who led the negotiations between government and the hotel, was not authorised to commit government to the closed agreement.

Alegria, represented in these proceedings by attorneys Eric de Vries, Charles Rutte and Carry-Lynn Martinus, stated that it had made “expensive” investments and that it has been negotiating with various VROMI ministers for two years about the issue of long-lease water lots.

“Alegria could have justified confidence that the country had granted a power of attorney to Mr. Kraaijeveld to accept the offer as stated in the email of May 4, 2020, from the representative of Alegria. Therefore, government is bound by the settlement agreement,” the judge stated in the verdict.

In the provisional opinion of the Court of First Instance, sufficient attention to the protection of the environment was paid in the draft decision to issue long-lease water rights. However, the long-lease does not affect the fact that for structures to be constructed in the water area, permits will have to be granted in the context of which environmental protection must be taken into account, the judge stated in the verdict.

“Alegria in their request wants to build a breakwater and a ‘seaquarium’,” Frye explained. “They have to apply for a building permit for the breakwater and then apply for an operating licence for the seaquarium or dolphinarium. But the dolphinarium part is still a rumour. However, now that the project is becoming more of a reality than a rumour we don’t want to wait until everything is built and a pool is sitting there waiting for dolphins. That’s too late. We want to act before any of that happens.”

A major concern is the breakwater. “From an environmental standpoint we can take action against that,” Frye continued. “The breakwater will change the currents and coral, have a huge impact on the environment, on the beach, on the waves, if a breakwater is built.”

She said she was very pleased with the turnout for a Sunday morning, bigger than expected, noting that people were there for different reasons, whether it was for the environment, to save beaches, save the coastline or save dolphins. The presence of children also indicated that awareness is being passed on.

The demonstration was also timely with France declaring a ban on holding wild animals in captivity for entertainment.

Fellow Dolphin Defenders board member Mercedes de Windt added: “They say the dolphinarium is a rumour, but we have to take that seriously. We learnt that in the past, when rumours turned into plans. I do hope people will be vocal about this and stand up for animals that don’t have a voice. I want to thank everybody who came out and expressed their concern. I encourage everyone to pick up a pen and write to editors, ministers, government, to stop this.”